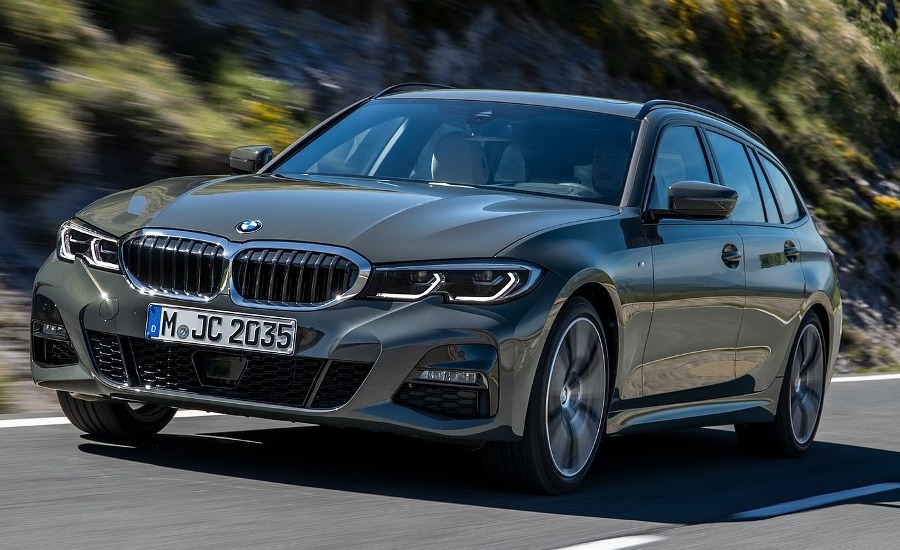 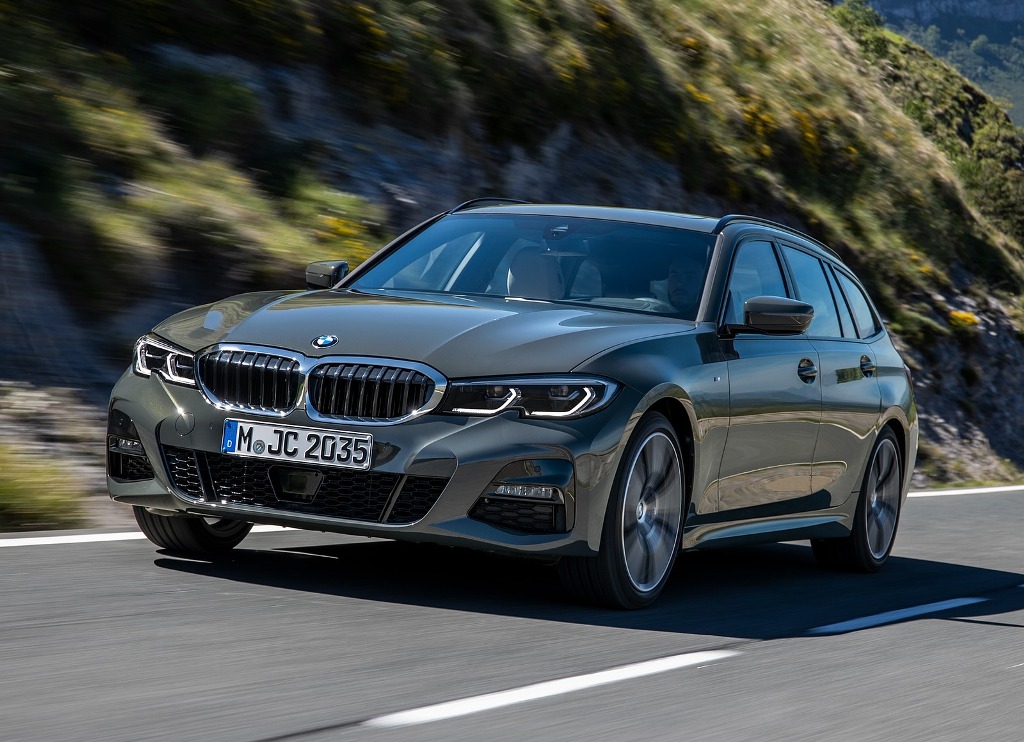 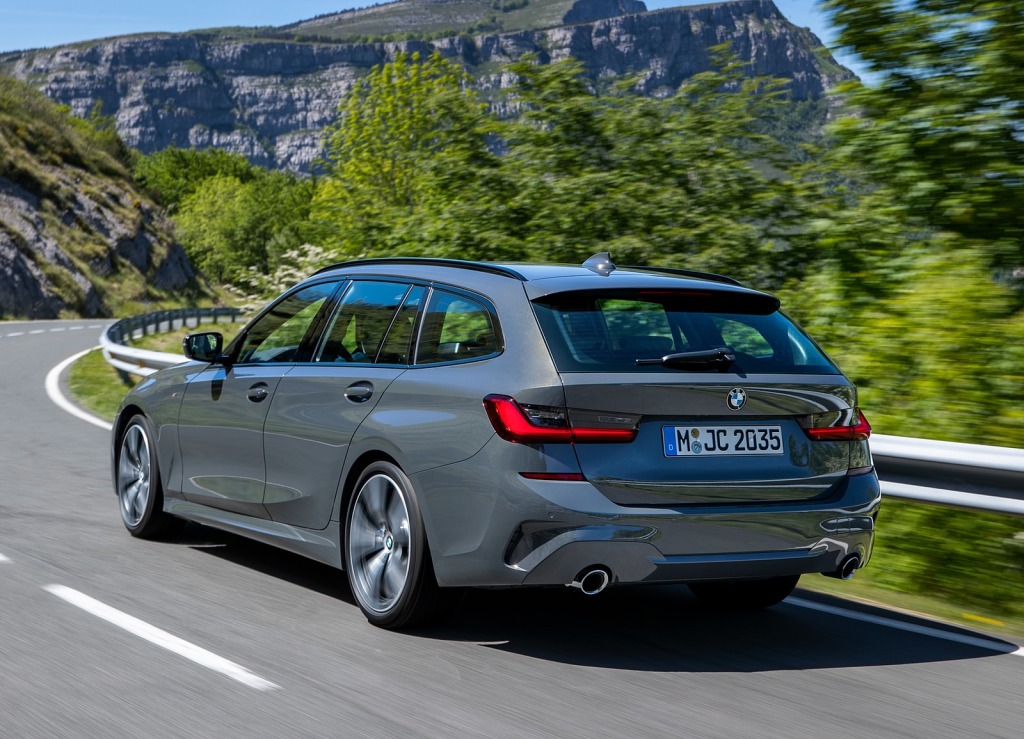 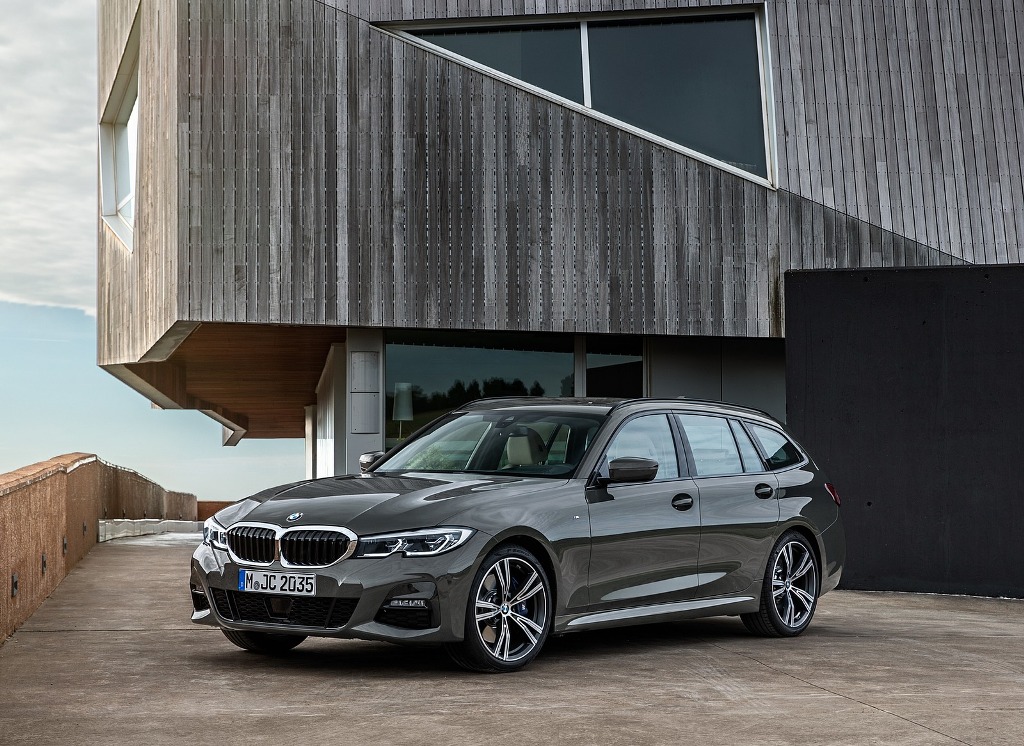 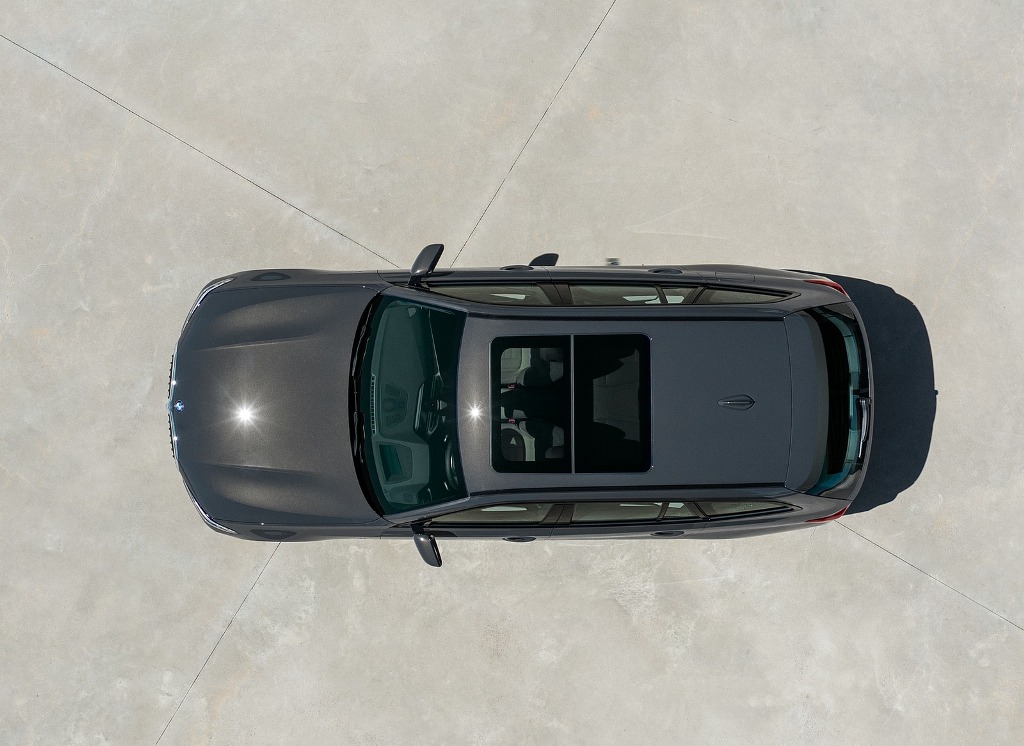 The new BMW 3-series Touring is longer, taller and wider than the car it replaces. It’s still instantly recognizable as a 3-series upfront to get a huge kidney grille. BMWs familiar twin headlights split by a barb in the front bumper as it expected. There’s a Hofmeister kink around the side while at the back you get twin exhaust pipes of which passed the car. 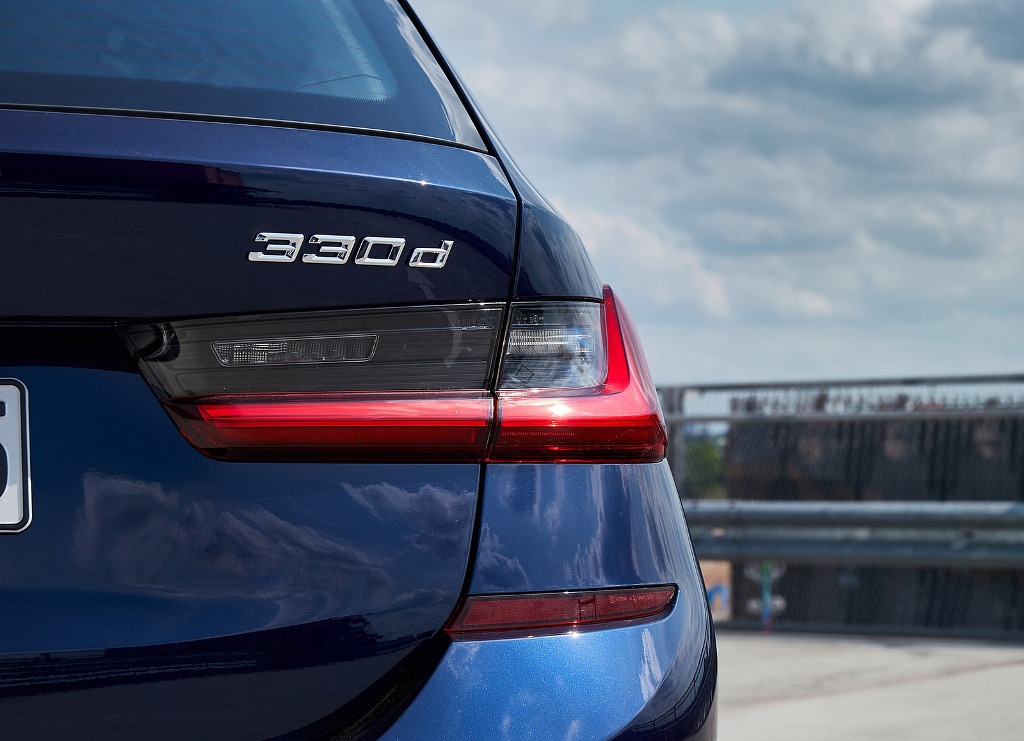 BMW has sold 1.7 million 3-series touring x’ since the car first went on sale in 1987. It may never have been developed if it wasn’t for a row. BMW engineer max Royce bach he wanted three series that was spacious enough for a family holiday. 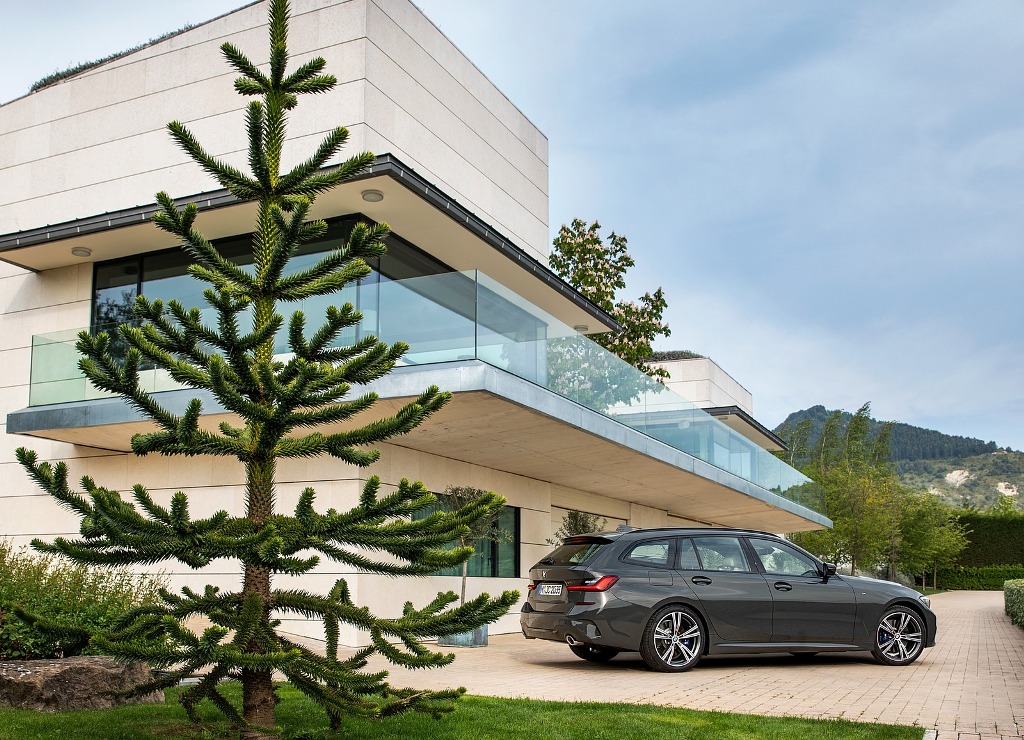 You can expect the new BMW 3-series toy to cost about 1500 pounds more than the equivalent saloon when it goes on sale later this year. That means the entry-level 320i will start from around 34,000 pounds. However, a top-of-the-range m3 40 IX drive with options will be in excess of 50,000 pounds. 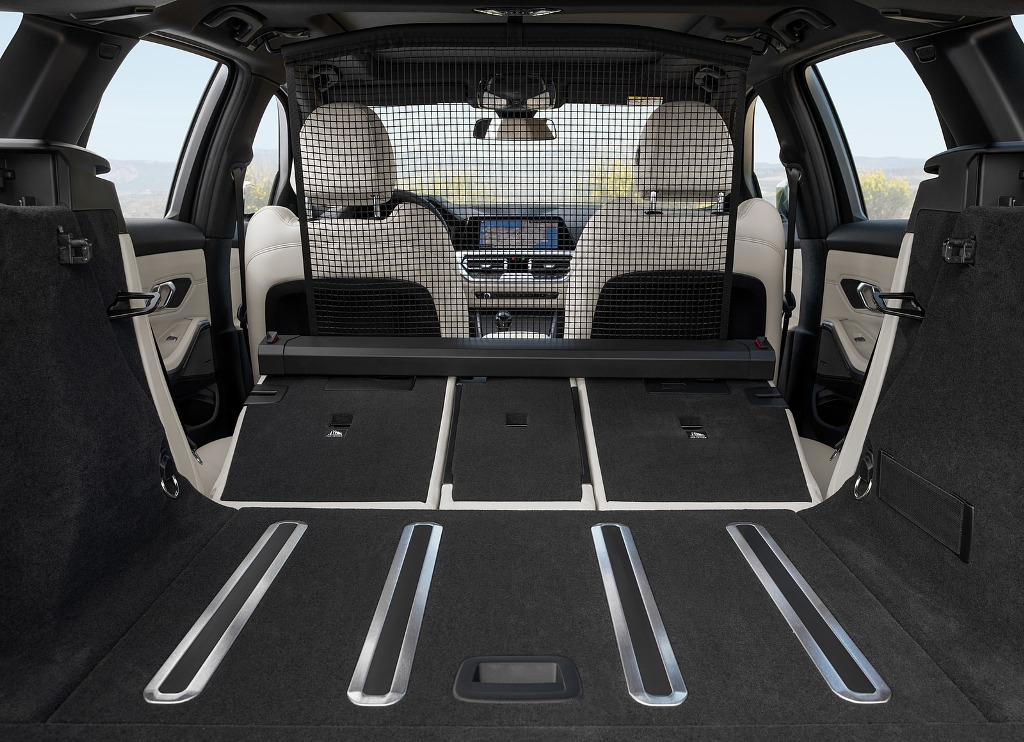 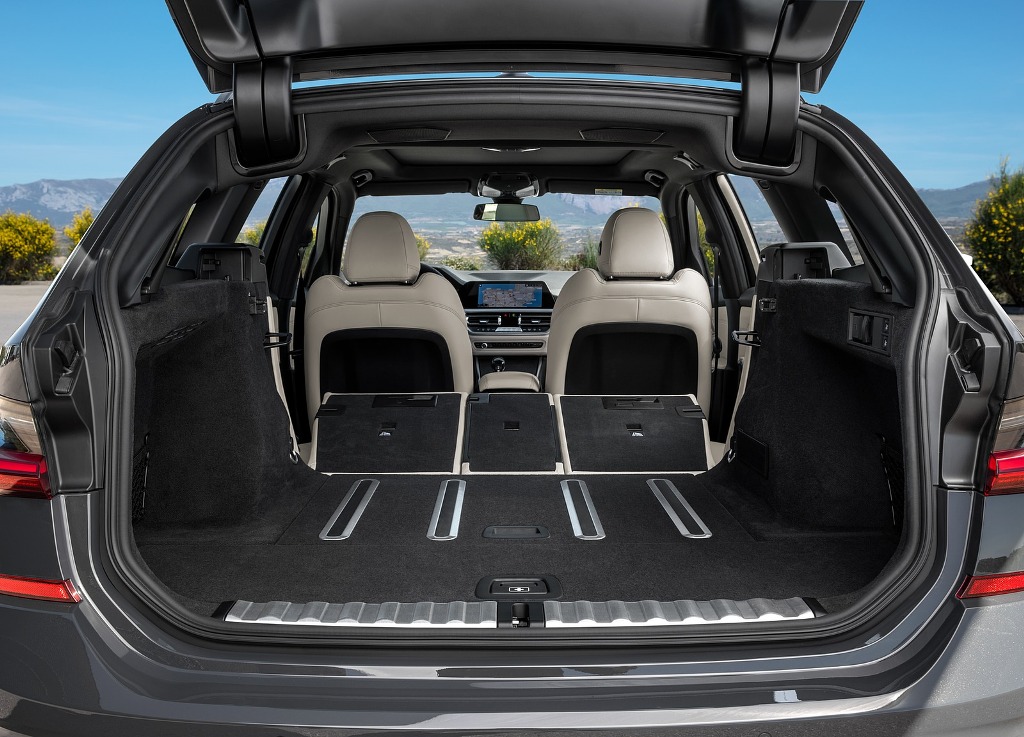 If you liked the old bin to be 3-series touring but just wish it’s boot could store two and a half more coke bottles. The new 3-series touring boot has a capacity of 500 liters which is 5 liters bigger than the old cars. That makes it a little larger than a Mercedes c-class estates boot but ever so slightly smaller than an Audi a4. You have a total capacity of 1500 liters plus the larger opening. Slightly lower load height over the old cars should make this latest 3-series touring even easier to load. You can now get it with anti-slip rails as an option. They rise out of the floor to keep your luggage in place when you’re driving but I can Boone. 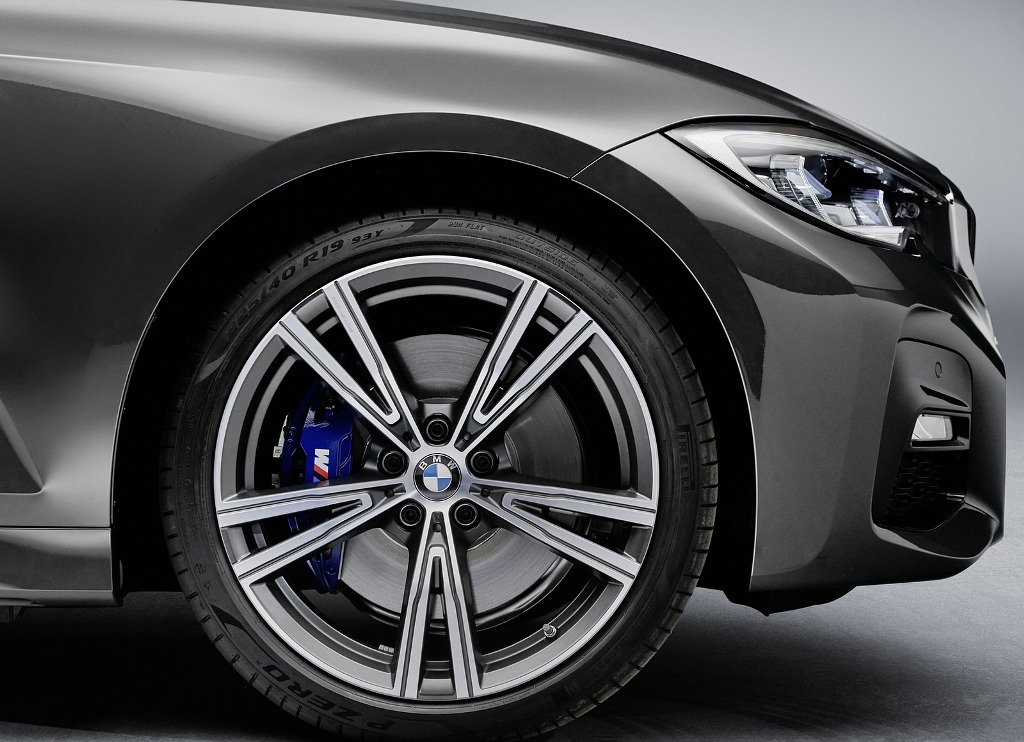 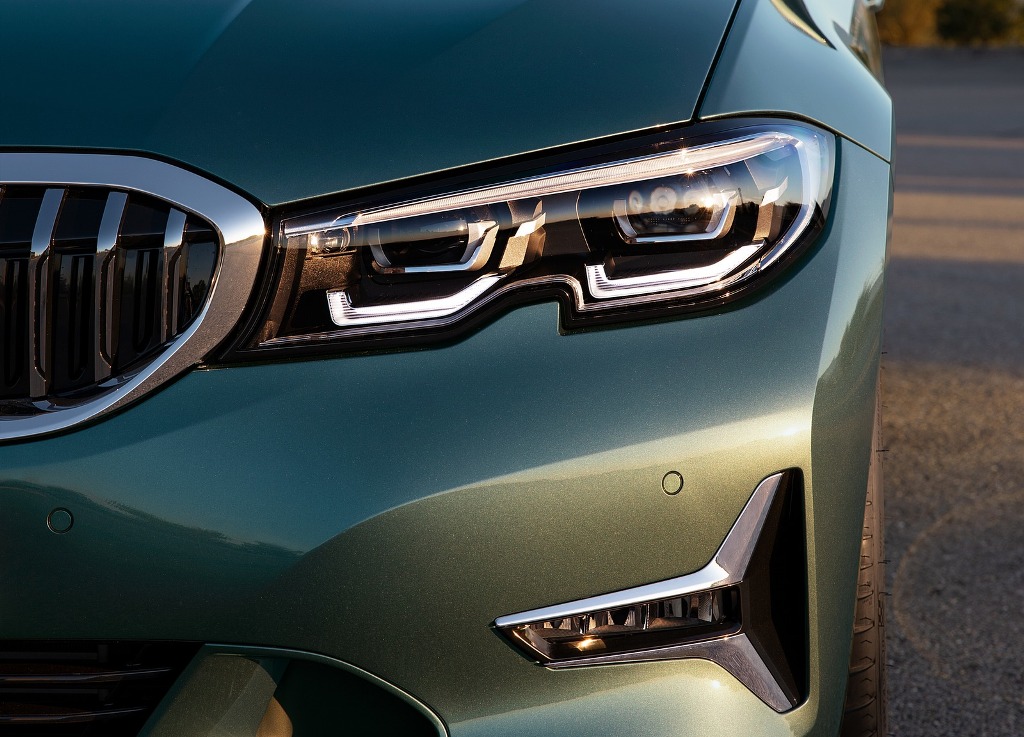 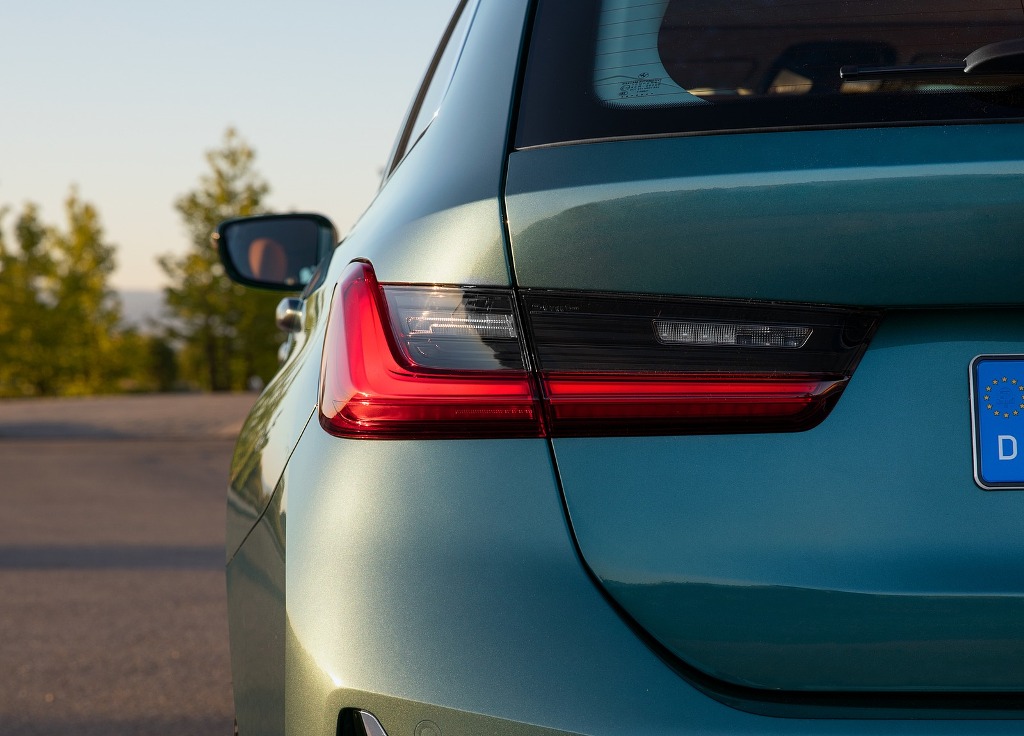 Even basic sport versions of the 3-series touring come with decent levels of kit. Including 17-inch alloy wheels, automatic lights, and wipers, three-zone climate control, acoustic glass for the front windows. A 100 watt stereo with 6 speakers and automatic emergency braking. M Sport Plus edition models sit at the top of the range. They get kits such as abraded, sport’s brakes, adaptive suspension, and 19-inch alloy wheels. 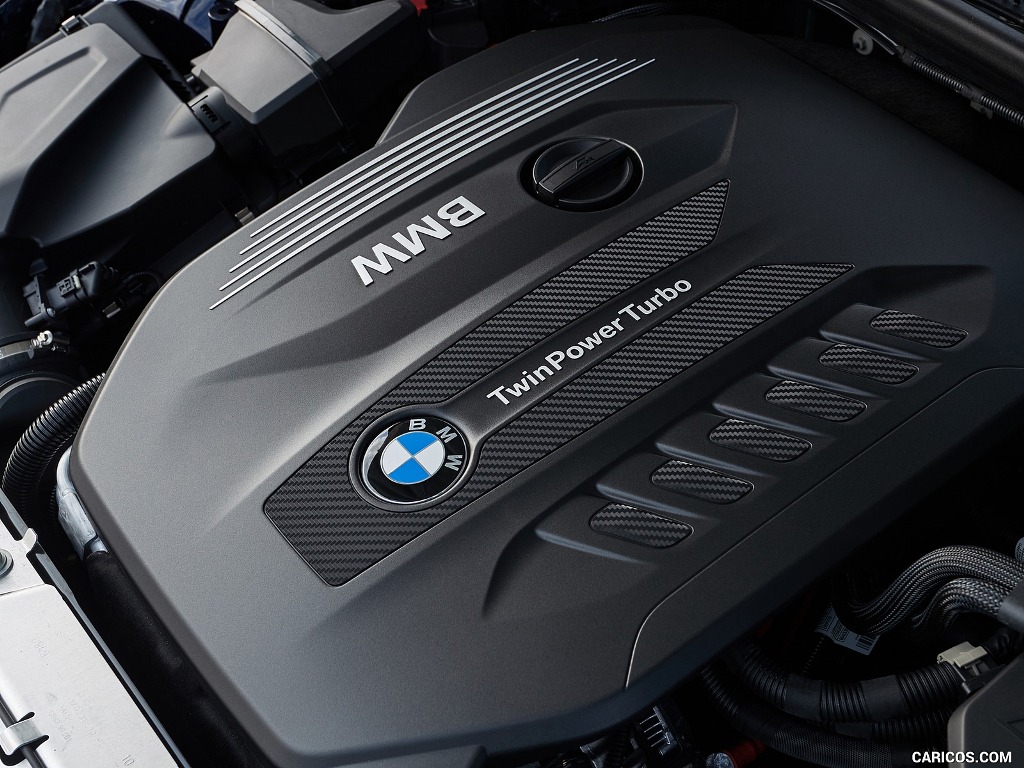 There’s a choice of three petrol and three diesel engines with the new 3-series touring the 150 horsepower 2-liter diesel engine. BMW says it can do 65 miles per gallon you can still sprint from nought to 60 in 8.9 seconds. The quickest model is m3 4 TI petrol. It has a 3-liter straight-six turbo with 374 horsepower and it also gets an 8-speed automatic gearbox and 4-wheel Drive. It does nought to 60 in just four point five seconds but she’ll be able to do around forty miles per gallon. 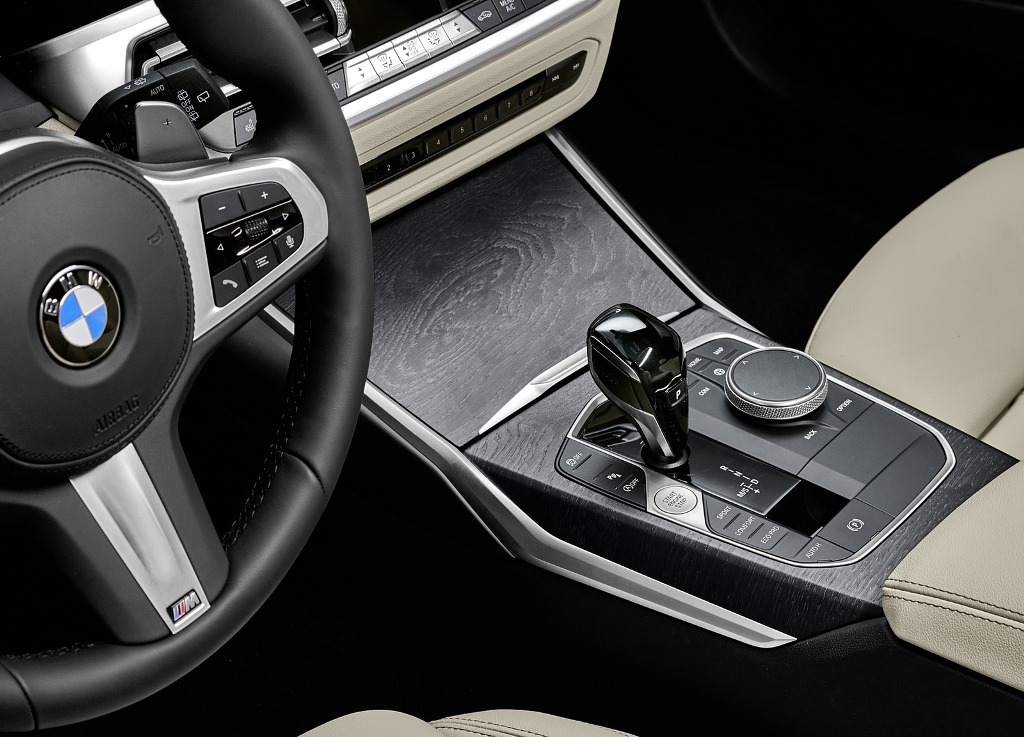 If you want to be able to be 3-series touring that is as eco-friendly as possible. You want the 330 plug-in hybrids it can travel around 37 miles on battery power alone. Will be very cheap to run even if you’ll never get near the hundred and 55 miles a gallon build degree claims. It’s capable of power comes from a 2 liter 184 horsepower petrol engine mated to a 68 horsepower electric motor to produce a combined 252 horsepower. Thanks to BMWs extra boost function. You also get an extra 40 horsepower for 10-second bursts of acceleration allowing the 330e to go from nought to 60 in just six points one second. 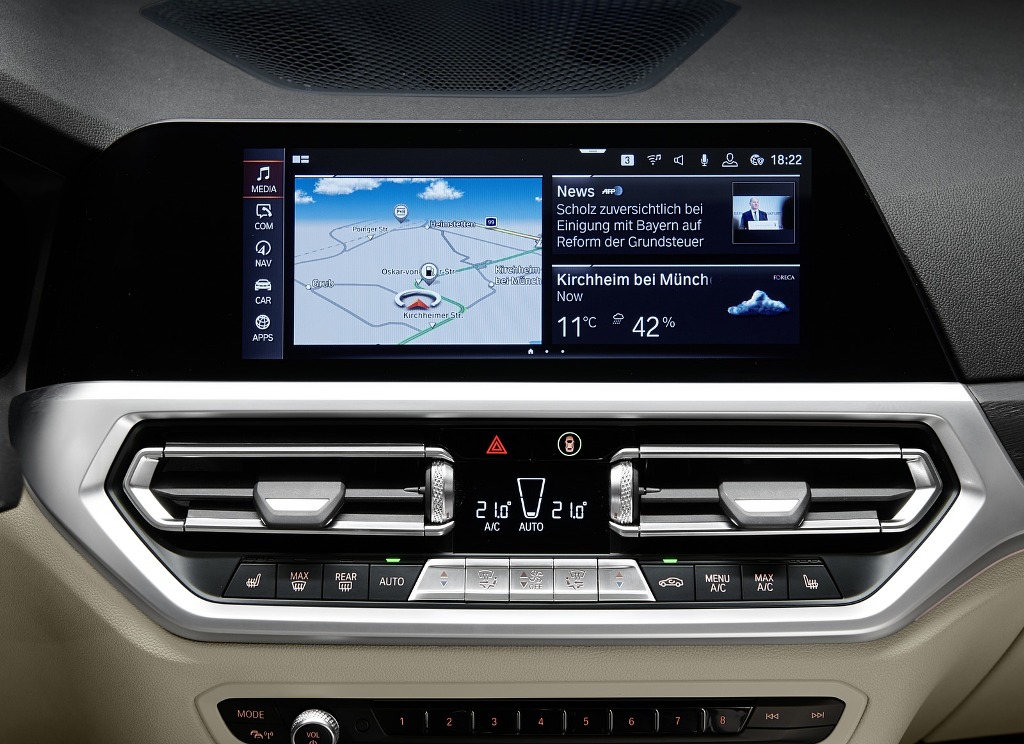 The BMW 3-series touring gets a nine-inch infotainment system with a personal assistant that’s a little bit like Apple Siri. You just need to say hey BMW to wake it up and then you can control many of the cost features via voice commands. Meanwhile, M Sport models boast a superior 10-inch main screen. Which is connected to the Internet allowing the sat nav to do stuff like finding your parking space near your intended destination? The sport also gets a 12-inch digital driver to display it’s the normal dials lovely. 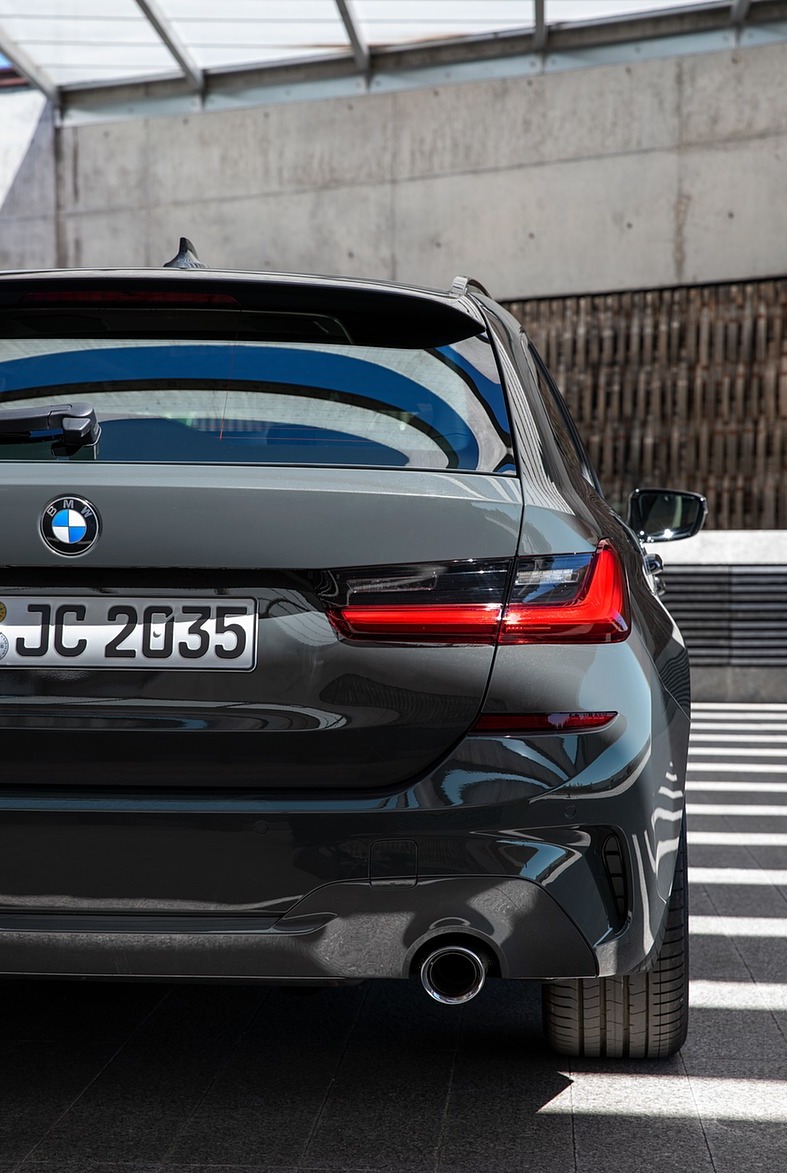 The new 3-series touring is about 10 kilograms lighter than the old model yeah no big
deal a more important though. Its body is 25% stiffer for a sharper driving experience. The M Sport Plus package makes a 3-series even better to drive the ads electronically controlled. You can stiffen the suspension for better control in the bends and variable sports steering to make the car feel more direct in the corners. 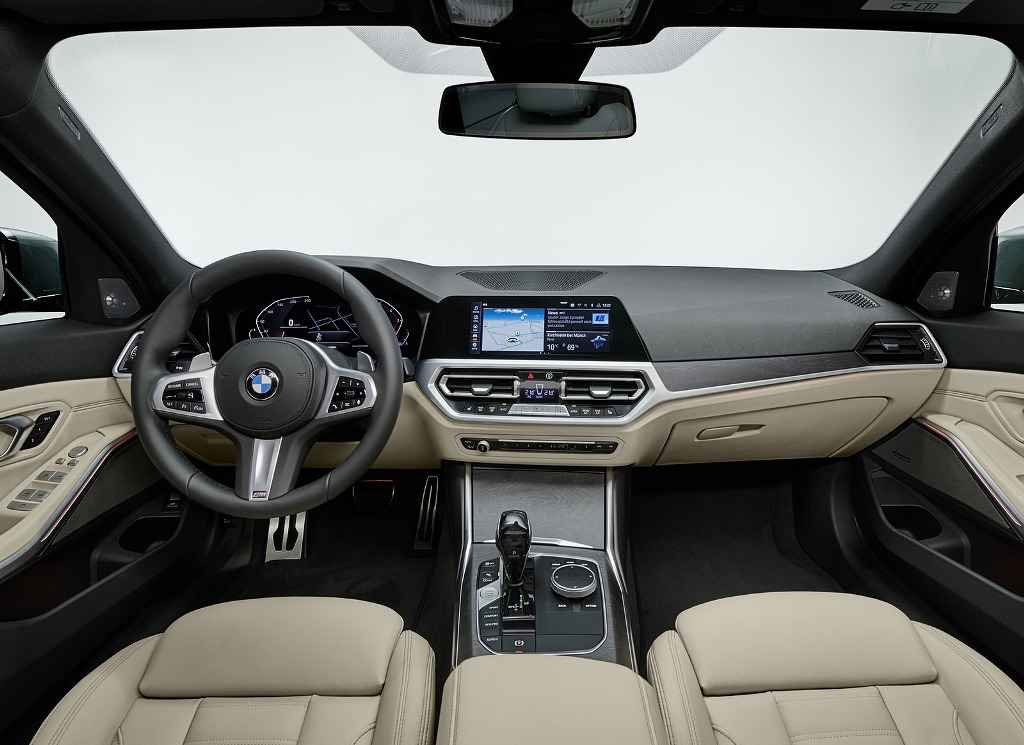 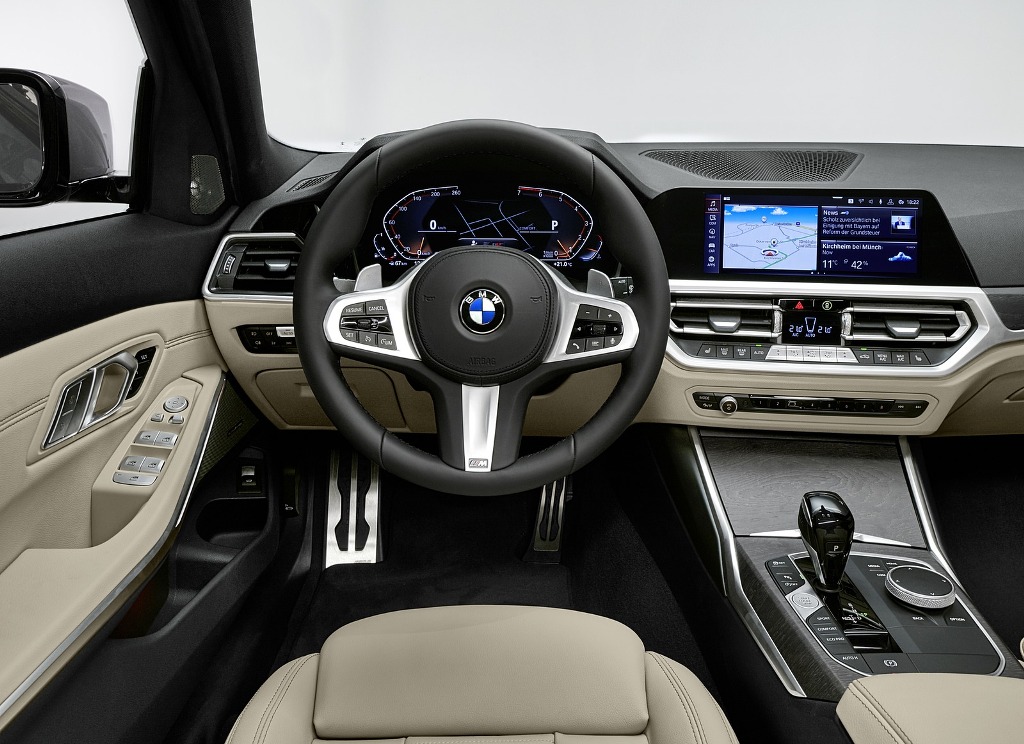 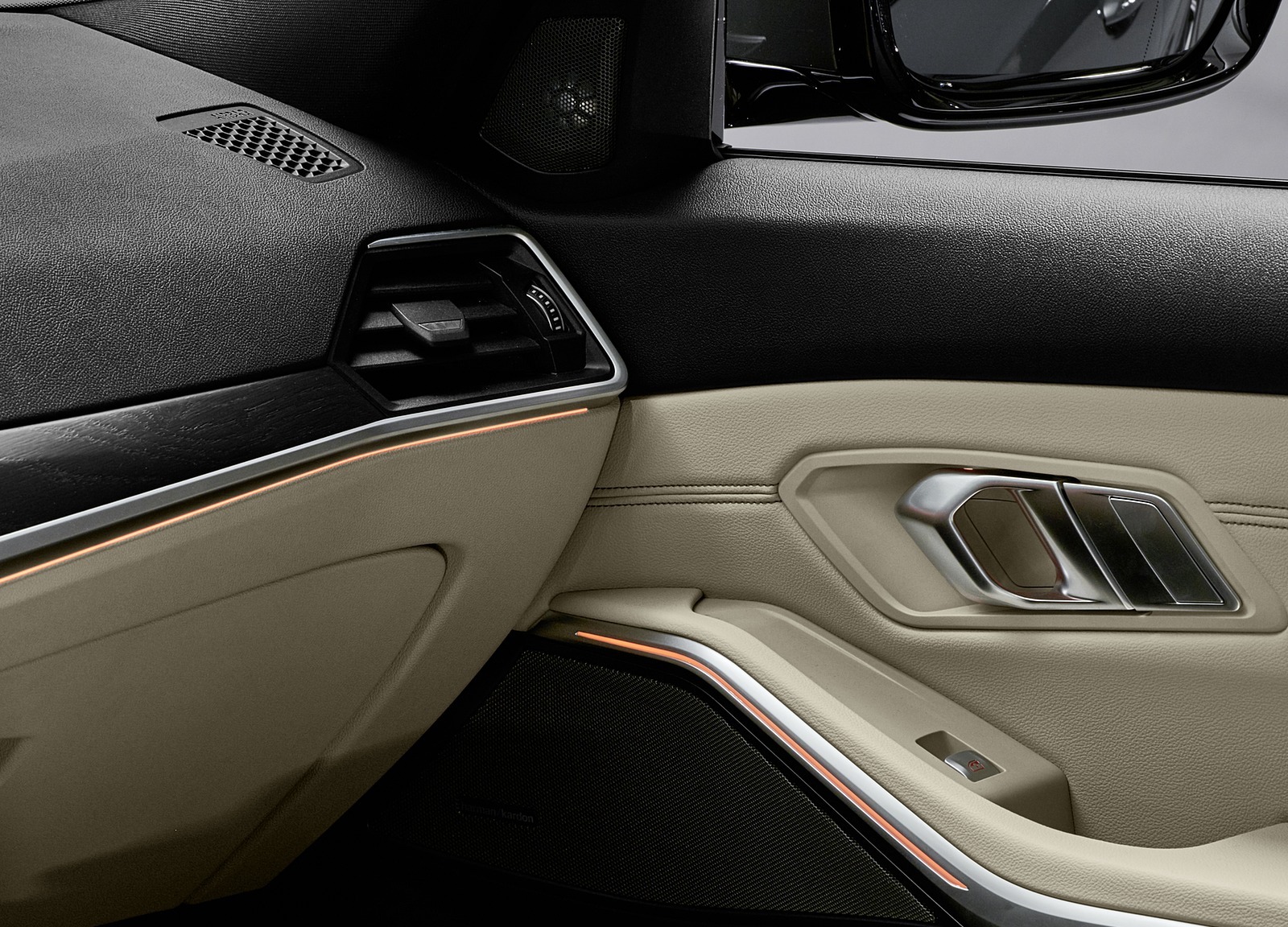 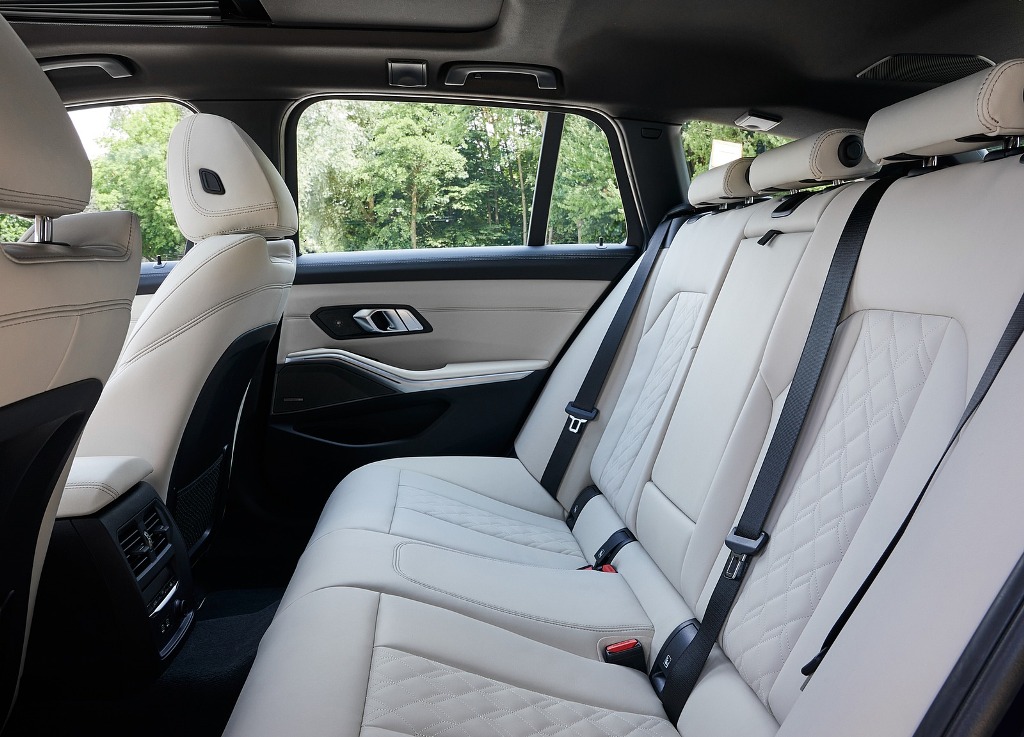 If you pay extra for the optional driving assistance professional pack the 3-series touring can pretty much drive itself on the motorway. It will also help steer you around obstacles to prevent a collision. If there isn’t enough space with the standard fits automatic emergency braking to stop the car in time. The pack also includes something called reversing assistant. This can replay your last 50 meters of steering inputs in Reverse to help you back out of a tricky situation. 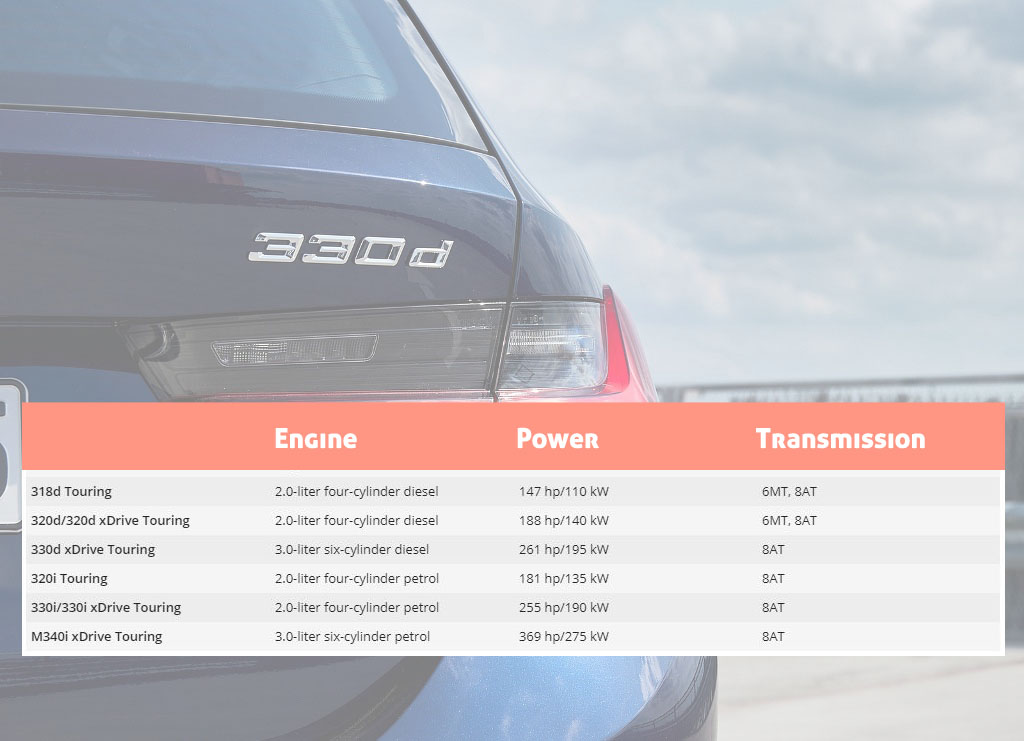