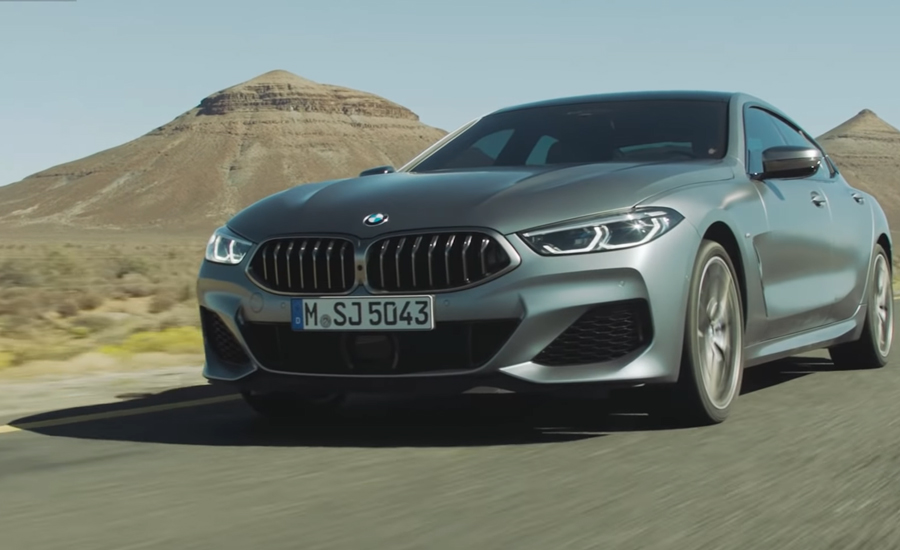 This is the new BMW 8 Series Gran Coupe a four-door version of BMWs flagship coupe a. Here the car top 10 things you need to know about it upfront the BMW 8 Series. 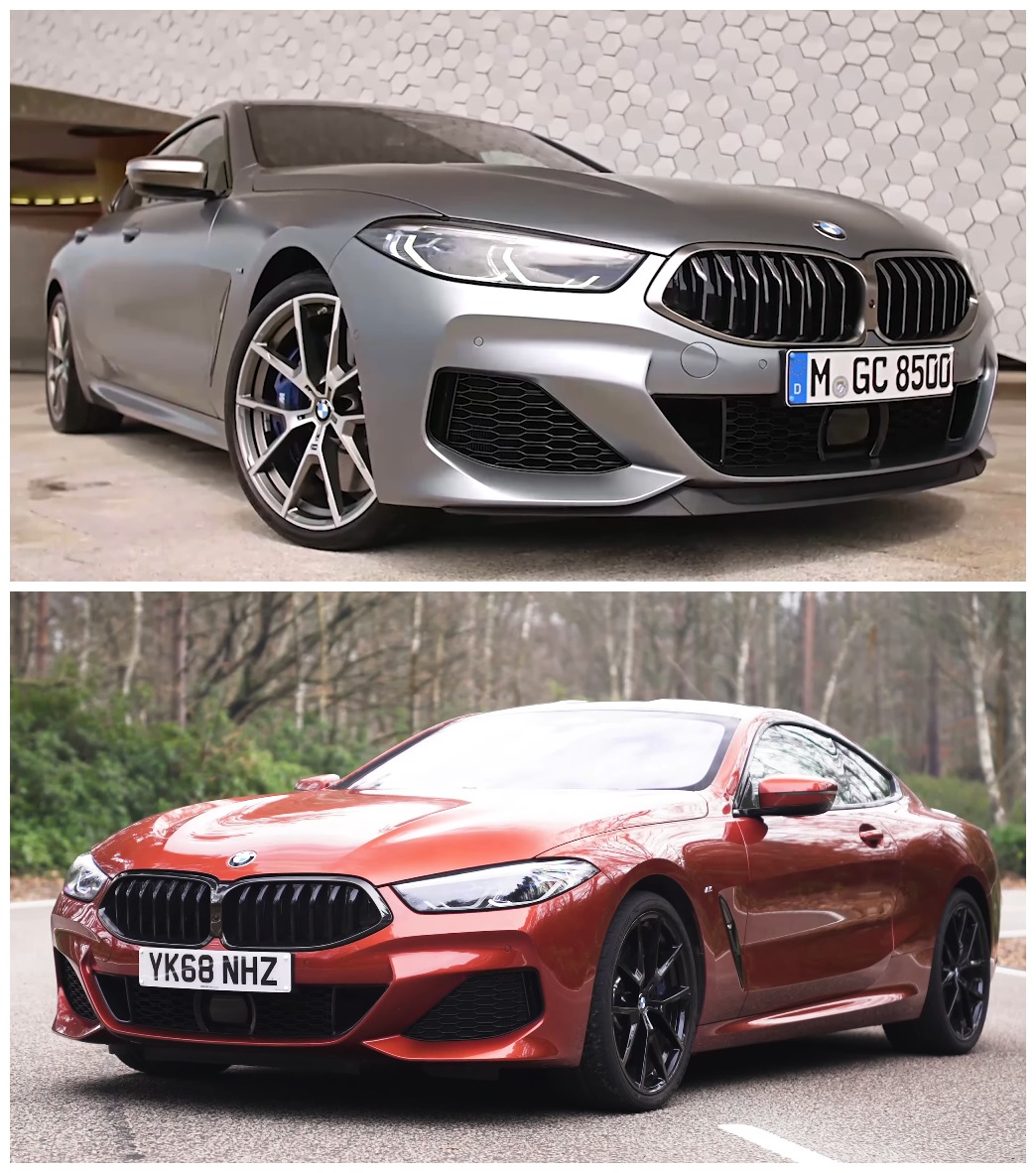 Gran Coupe looks almost identical to the two-door model but gets a taller roof and a steeper windscreen around the sides. The differences are much easier to spot. The Gran Coupe has four pillars, fewer doors but it also has been stretched and has a longer sloping roof around the back. The car looks like a hatchback but it’s actually a saloon with a boot that’s only slightly bigger. 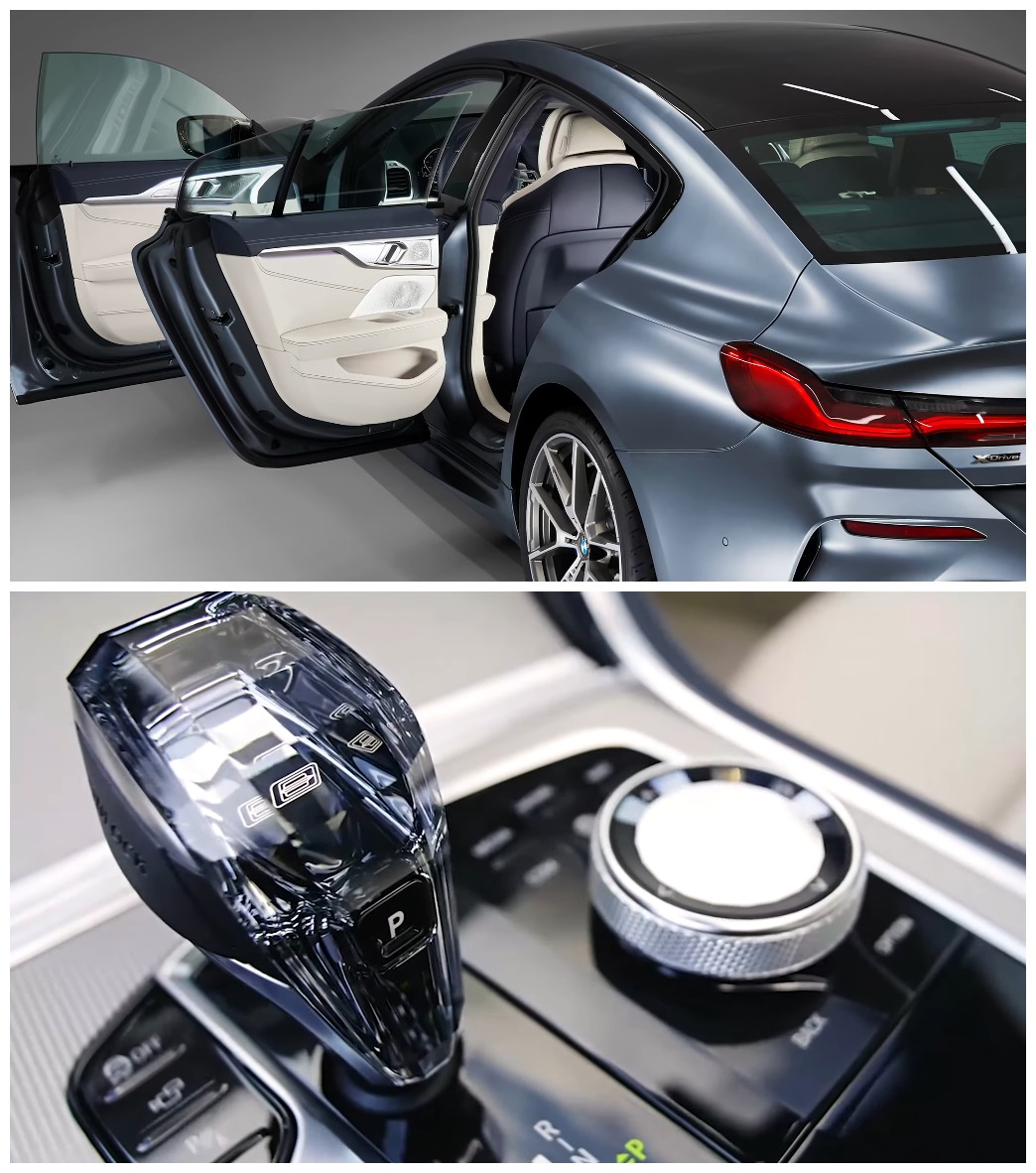 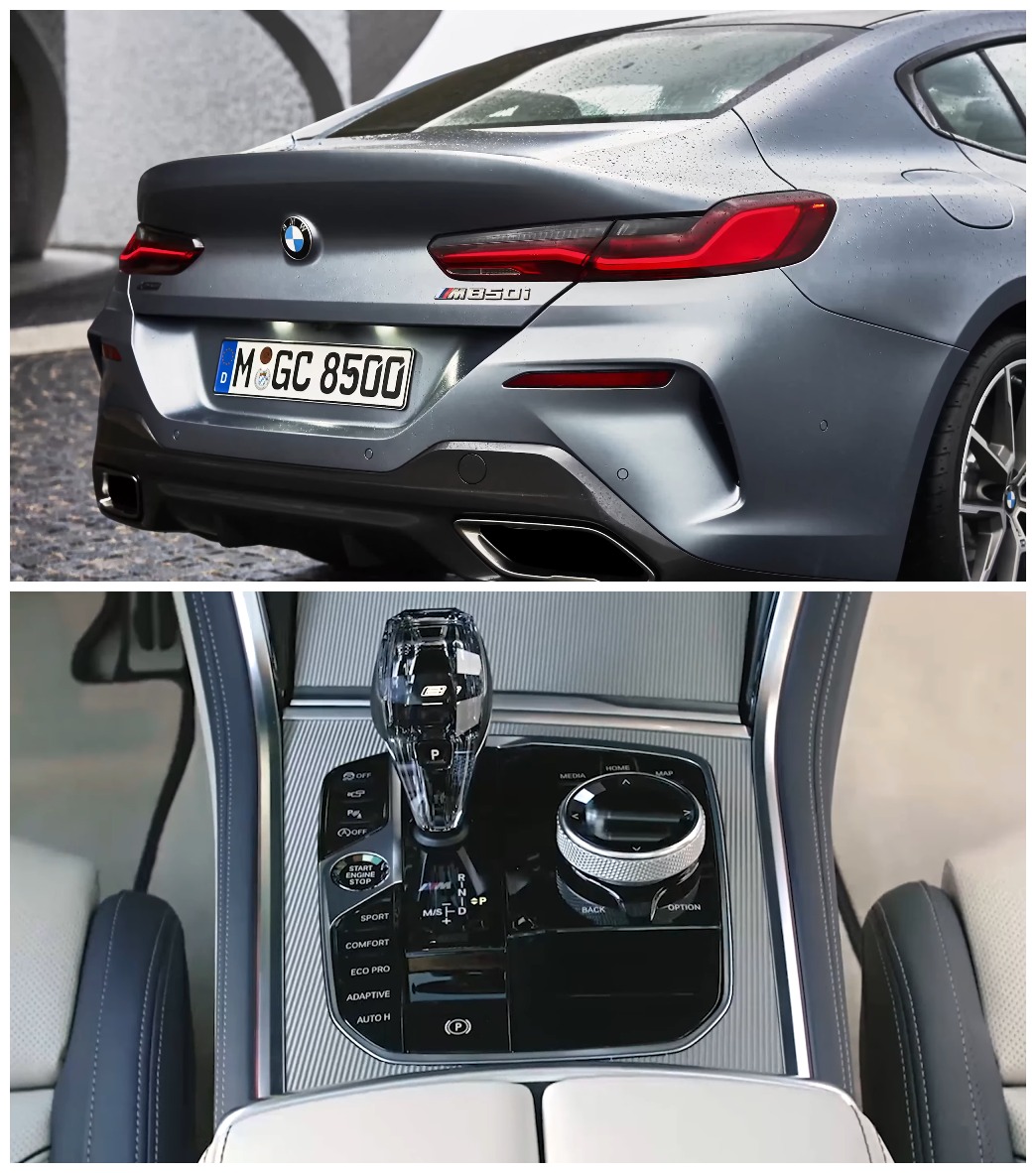 To ensure the Gran Coupe drives, as well as the normal eight series BMW has made a serious effort to keep the weight down. As a result, large portions of the car but the bonnet, are made from aluminum. While the center tunnel is made from carbon fiber, reinforced plastic the dashboard. However, is supported by a magnesium frame and the boot lid is molded from plastic. You can even specify a pricey carbon-fiber roof if you want. As a result of the Gran Coupe, a weighs just 70 kilos more than the two-door model. 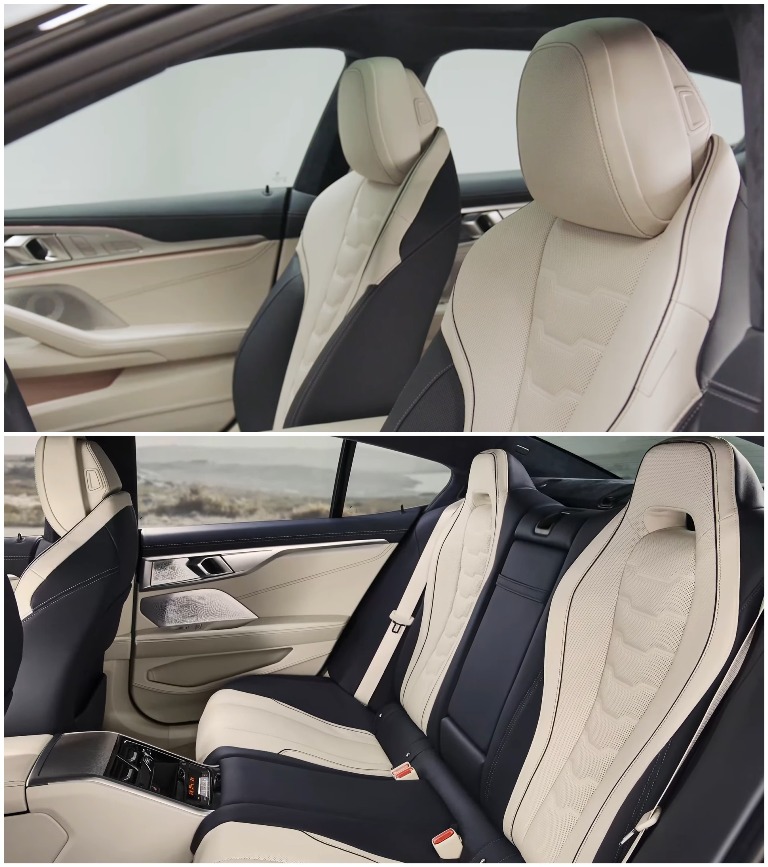 By making the 8 Series Gran Coupe a bigger than the two-door model BMW has made it more spacious on the inside. A front to get more head and elbow room while the large rear doors make access to the backseat easy instead of a rear bench. The Gran Coupe has two spacious individual back seats with a tiny third seat squeezed in the middle. Really calling this configuration four plus one which kind of works but only if you’re plus one is Richard Hammond sized. 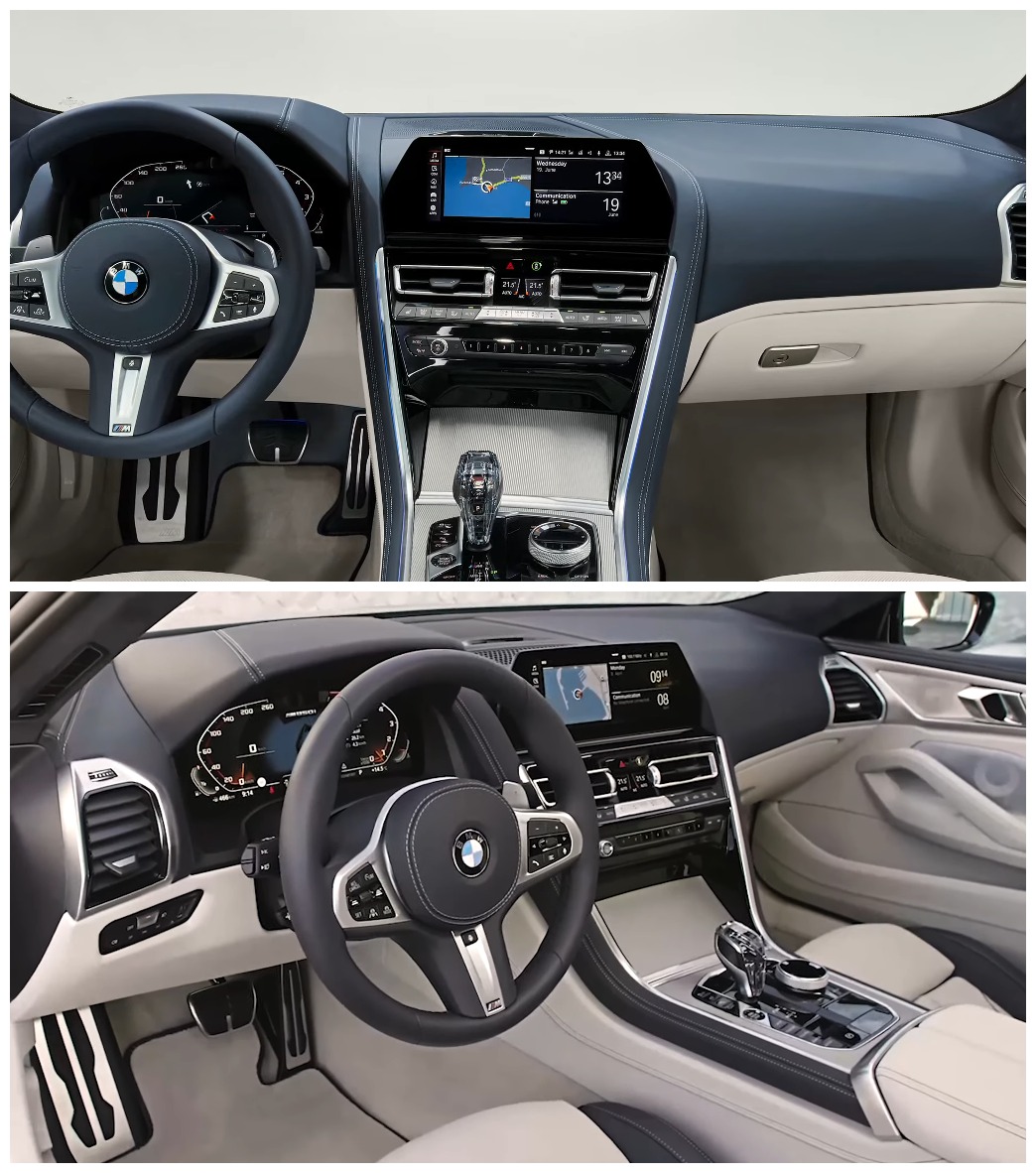 As you’d expect the exurbs Gran Coupe a gets BMWs top-of-the-range entertainment system as standard. This includes a 12-inch digital instrument binnacle and a 10-inch central screen. This can be controlled by touch using gestures or via the iDrive control wheel. Between the two front seat BMWs, the personal assistant voice activation system is also fitted. It can understand spoken commands so if you say hey BMW I’m stressed out they’ll call the cabin to pump soothing music through the speakers. Even administer a light massage if you bought the optional massage seats. 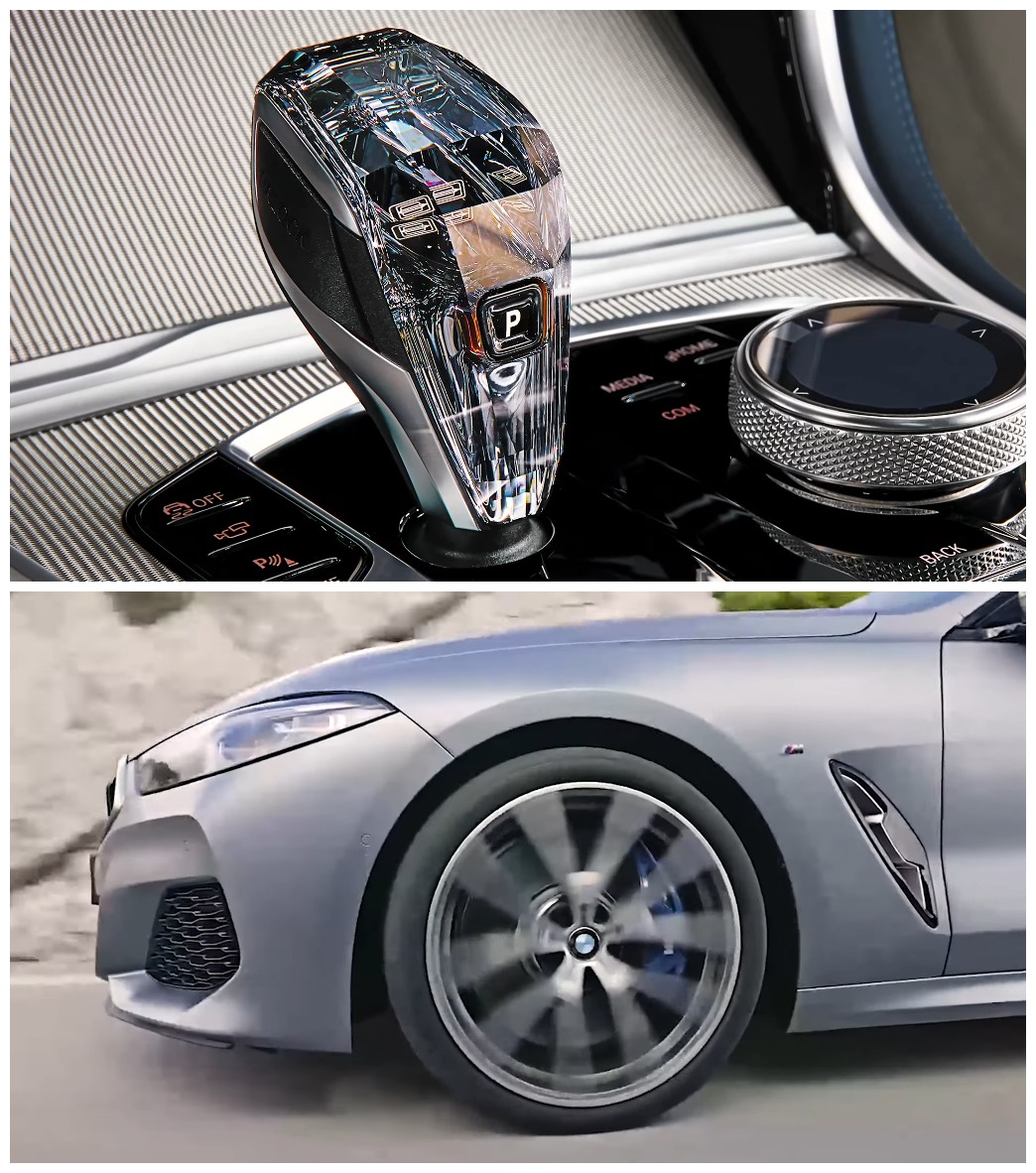 The new 8 Series Gran Coupe comes with an 8-speed automatic gearbox and a choice of two petrol and one diesel engine. Kicking off the range is the rare Drive 340 horsepower 840 I which gets from naught to 60 in 5.2 seconds. The second petrol is the range-topping M 850 ID and it can do naught to 60 in 3.9 seconds. However, the 320 horsepower 840 Dees truly to diesel makes the most sense. It has four-wheel drive and can accelerate from naught to 60 in 5.1 seconds which is pretty respectable. It also returns 45 miles per gallon a figure that’s about 50 percent better than what the m855 manages not. Anyone who can afford that car cares. 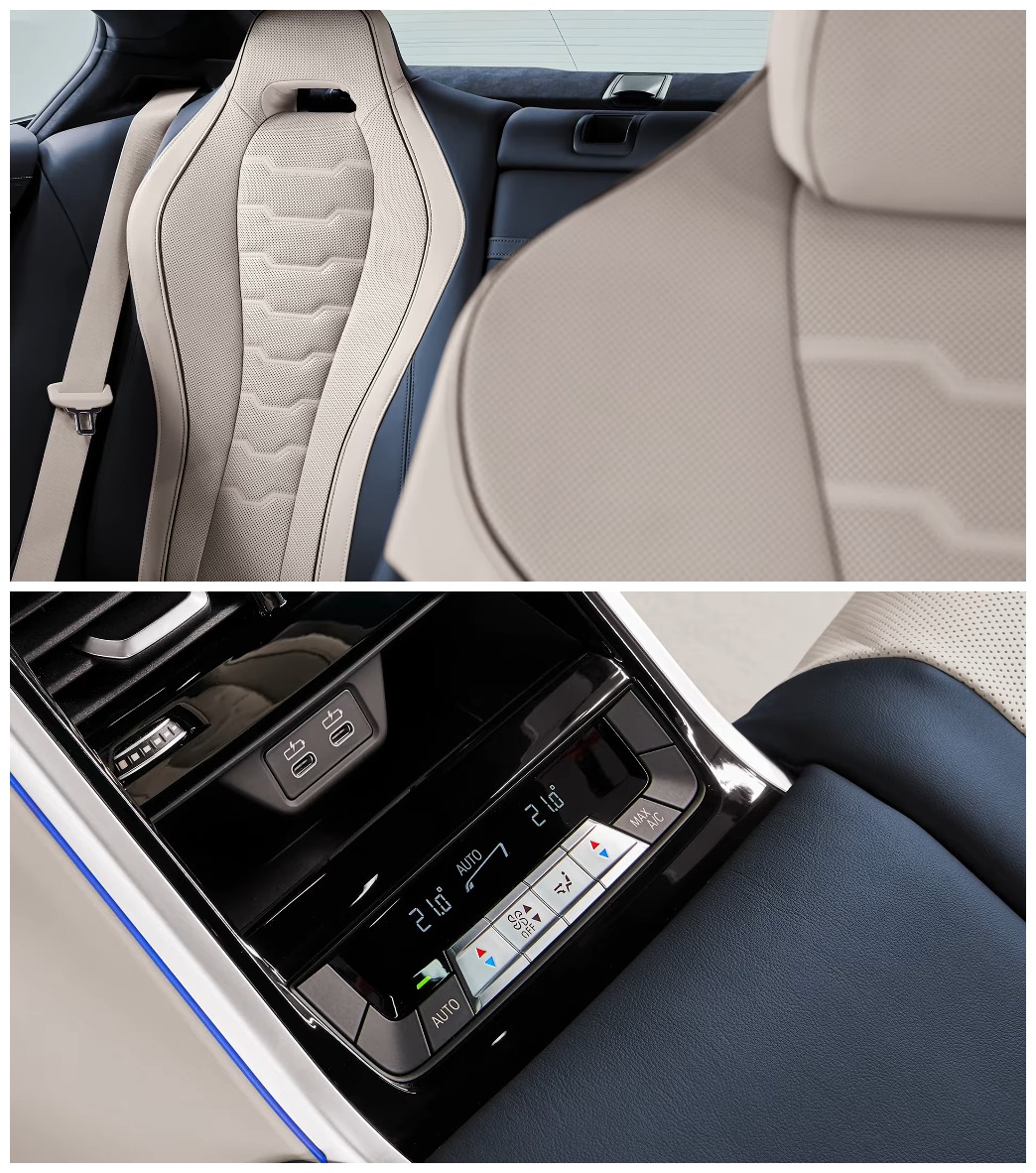 As the flagship of the beam to be range the 8 Series Gran Coupe a is not short on. Kit leather comes a standard and you get electrically adjustable and heated front seats. Wireless charging for mobile phones is also standard as is for zone climate control with individual ventilation settings for the four corners of the car. To go with your flagship model, you also get a flagship key called the BMW display.

Related:  2020 Mercedes-Benz GLS: 10 Things You Should Know About 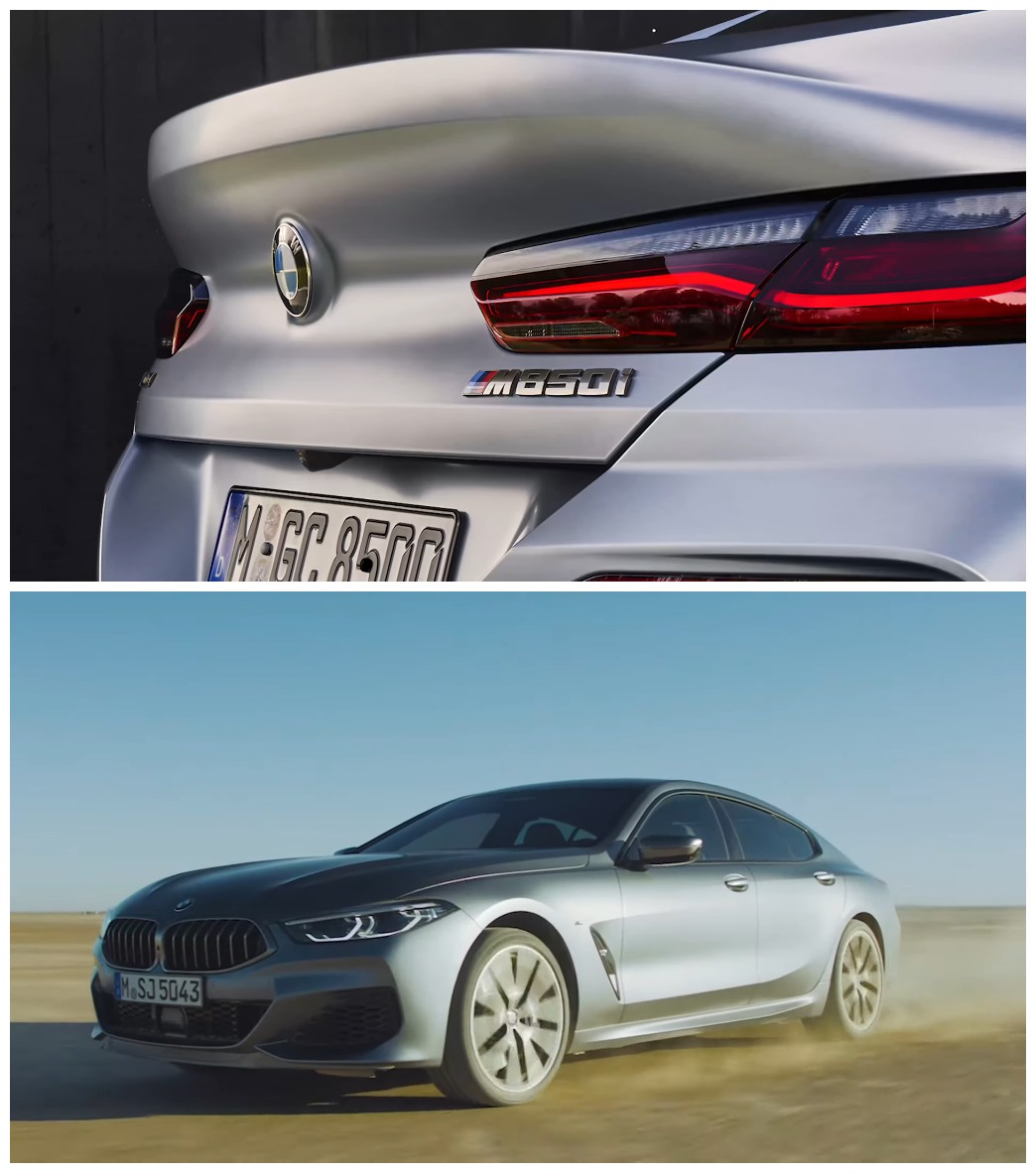 The new 8 C’s gran coupe 8 gets a sporty setup all models get an adjustable suspension. X Drive four-wheel drive cars add four-wheel steering which makes the gran coupe a more maneuverable at low speeds and more agile in fast corners. There’s the M Sport differential which you get standard on both petrol models allowing you to slide the ground. 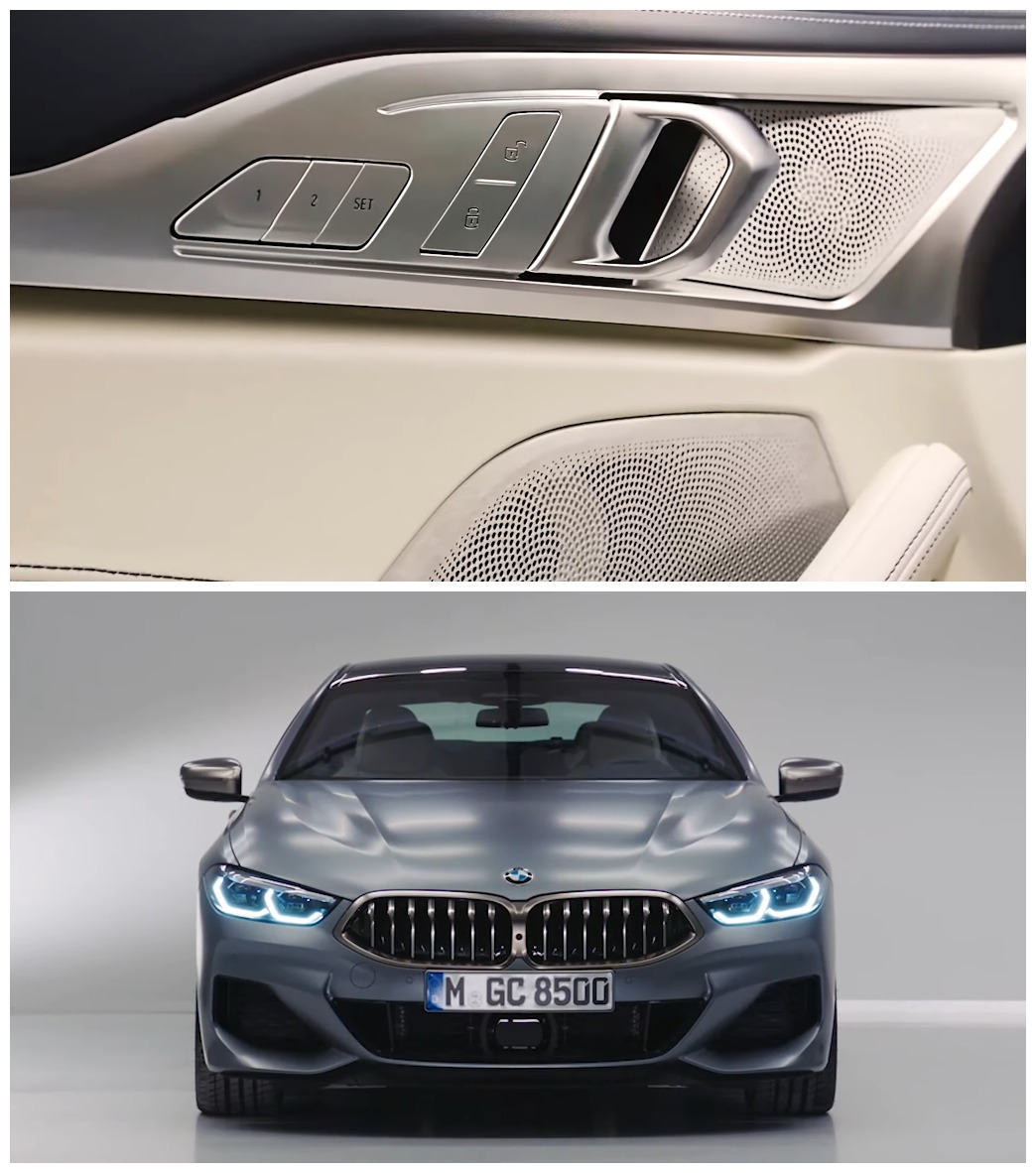 The 8 Series Gran Coupe a might sit at the top of the BMW rage but that hasn’t stopped the Germans from squeezing in a few actually quite a few features for the options list. Then fancy the sound of the measly 9 speakers, 205 watts standard stereo. Why not go for the 464 watt Harman Kardon sound system or just head straight for the 14 hundred watt barrows and welkins. Boneshaker wants your steering wheel and armrest heated of course you do. Therefore you need the heat comfort package and all this means if you’re not careful it’s easy to add. The cost of a brand new family hatchback the price of your 8 Series simply by adding some options. 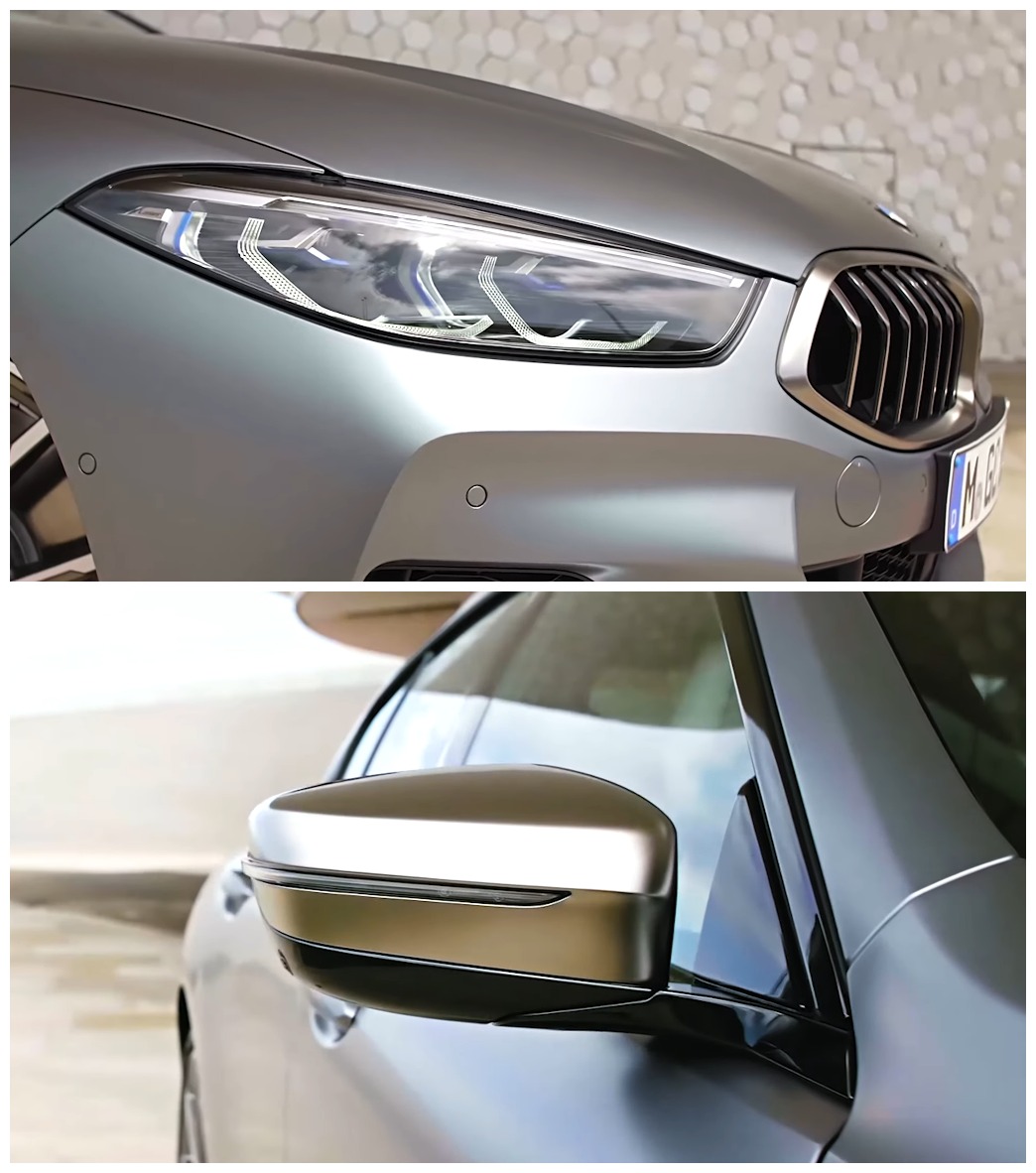 The new 8 Series Gran Coupe comes with basic autonomy such as automatic emergency braking as standard. To get the cleverest self-drive kit you’ll need to specify the driving assistant professional package. Click on that in the configurator and your 8 Series will be able to drive and steer itself on the motorway and in traffic. It also adds invasion Assist which can automatically help steer around an object if it thinks you’re gonna crash into it.