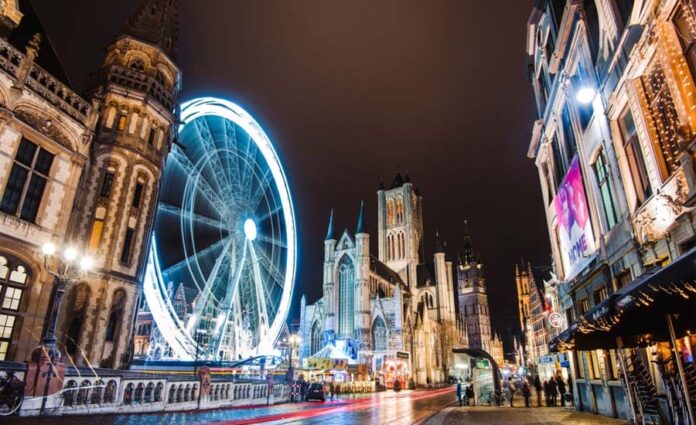 Christmas is coming are you ready to enjoy your holidays. If you are in struggle to find the best holiday destination to entertain your family then here we something for you. Check out the biggest winter festivals held in Europe you must attend.

The French Riviera is a destination world-renowned for its beautiful Mediterranean coastline. Incredible beaches, Breathtaking architecture and inviting winter not to mention the casinos, markets, food, and wine. The town of Menton is just one of the various coastal towns that make up the French Riviera. But it’s got charmed to spare in the form of boutiques and narrow cobblestone streets come February. However, this little town undergoes an awe-inspiring transformation for its annual fight to stall which translates to the lemon festival.

The town only has a population of approximately 28,000 people but the fights acetal sees that numbers swell by over 200,000 visitors during the festivities each year. The citrus harvest is celebrated with a number of elaborate and massive sculptures. Made up of the area’s world-renowned oranges and lemons. Typically designed around a specific annual theme. It goes without saying but this is one of the most unique art displays you’ll ever see. And one of the best smelling festivals anywhere in the world so much for snow and ice.

Do you like Vikings if your answer is yes, or you’re simply curious as to why we’d ask you that. You might want to consider checking out the wonderfully titled Up Helly Aa held every winter across the Shetland Islands of northern Scotland. A paleo celebrates the Viking heritage of the area and does so with a community-minded and epic display. That surely would have made their marauding ancestors proud of the dozen or so. Up Helly Aa celebrations over the winter months.

Related:  10 Most Beautiful Places in Ireland to Visit Now

Lerwick is home to the biggest of the bunch in January up to a thousand men in costume. Divided into dozens of different squads go on the March putting on one heck of a parade performance. Leading the festival is the honorary yarl and he and his carol squad dressed in full Viking regalia. The climax of the festival is the ceremonial boat burning each year of Viking longboat replicas are built only to be burned down by the torch-bearing participants now that’s a party.

For those who like a nighttime display of color – all the smoke and fire might we recommend the Amsterdam light festival held annually usually from November in February. This event brings together artists from across the Netherlands and around the globe. In order to put together all the inspiring works of art made of light. Now as anyone who’s visited Amsterdam can attest. This is already one beautiful City between the architecture and the canals be a day or night.

Amsterdam has got a real fairytale quality to it even though excessive tourism is taking its toll. But, when you add dozens of unique and surreal luminescent art installations into the mix central. Amsterdam takes on an entirely new identity part of the light festival experience is simply walking around the city discovering the works of art as you go. But for those really looking to get the most out of the festival we recommend taking one of the officially partnered nighttime boat tours. Which lets you appreciate the installations from one of the city’s favorite perspectives the canals.

Krampus makes the winter festivities of the Shetlands look tame by comparison most times of the year. A trip to famous Salzburg is a peaceful and relaxing one nestled in the foothills of the Alps. This Austrian city draws in travelers with the Baroque architecture of its historic center and its ties to classical music. It was the birthplace of Mozart himself but as Christmas approaches in December. Salzburg undergoes a transformation most sinister as the streets become overrun with monsters paying homage to pagan tradition and folklore.

Related:  10 Amazing Facts About Poland That Most People Don't Know

The people of Salzburg dress up in the terrifying costumes of mythical goat demon Krampus and his evil elves the perched. In order to scare away malicious winter spirits and scare kids. There are a number of Krampus related events that occur throughout Austria in and around Christmas time. But the Salzburg Krampus parade is among the most memorable and large-scale.

Not interested in Christmas with a horrific Halloween twist then we recommend making a trip to London during the winter season. Where the holiday festivities are a bit more conventional though nonetheless memorable. Hyde Park winter wonderland is a relatively recent addition to Europe celebratory calendar having only had its inaugural edition in 2007. But it has quickly become a beloved tradition that warms the hearts of millions of holiday revelers. Both London locals and from around the world from mid-November until early January.

A large portion of Hyde Park plays host to this massive holiday-themed fair. Here you’ll find the UK’s largest temporary outdoor rink an ice sculpture display over 100 amusement park rides. A children’s area called Santa land, a marketplace, a performance space, a massive Ferris wheel, a Bavarian village, a bar on a carousel, and even more. The Hyde Park winter wonderland is the sort of place where even the biggest Grinch is sure to rediscover their holiday cheer.

When you’ve seen one light festival you haven’t seen them all not by a long shot. While the mountain Lumieres festival already took us to France. You’ll find very little in way of overlap at Lyon’s fete des lumieres held annually in early December. This festival of lights is deeply rooted in tradition yet. It’s also a massive showcase of technological advances in lighting. Historically the people of Lyon have placed candles along their window sills as a show of thanks to the Virgin Mary. To whom they prayed to save them from the plague in the mid 17th century.

Related:  10 Most Famous & Expensive Tombs In The World

They also celebrate with a procession to the Basilica of Nikodim, the Fovea which along with the statue of the Virgin Mary erected outside the Basilica. In 1852 serves as a focal point for the festivities. Though the Fete des Lumieres only last only 4 days it draws anywhere between three and four million visitors each year with its spectacular light installations. The images projected onto the Basilica are utterly surreal as are the various shows and displays found throughout the city.

This unique and iconic Italian city is a place of magic and enchantment to walk. Its picturesque streets or take a gondola ride. Along its breathtaking canals is to step into a fairy tale right out of a storybook. Of course, over-tourism is definitely a problem in Venice and on any given day it can feel like the city is almost exclusively populated by outsiders. But for those who find themselves turned off by the literal boatloads of tourists, Carnival is the answer.

This yearly festival is held every February sometimes running into March and is instantly recognizable for the elaborate masks and costumes were worn by the revelers. It’s a festival rich in history that dates back hundreds of years. And these days during carnival it feels as if the city has traveled back in time to a more decadent area. Masquerade balls, parades both on water and through the streets, feasts, costume contests, performances. Carnival is Venice at its most vibrant and enchanting.