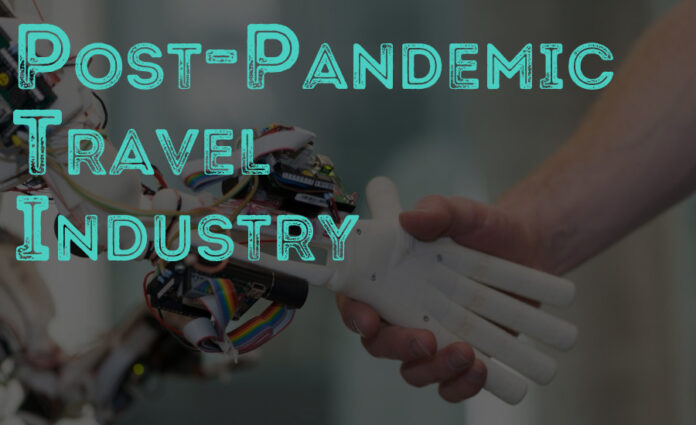 Robots Behind The Counter

As robots become a major part of the travel industry. The biggest and most in your face change that travelers are likely to notice are well the robots. Various hotels, cruise lines, and airports have already brought robot employees into the fold to serve a wide variety of roles. The Royal Caribbean cruise line has introduced a Bionic bar where two robotic arms can mix up a wide variety of cocktails in record time including custom orders over. At the Marriott Hotel in Ghent, a robotic concierge in mascot Mario helps at the front desk.

Perhaps the most famous such example is the robotic front desk staff at Japan’s Henn Na Hotel. Which is staffed by robotic humans and dinosaurs to handle check-in. The hotel opened in 2015 and it’s inhuman staff members are notably imperfect but the novelty largely makes up for it and regardless of their shortcomings. It’s not hard to imagine them being quickly replaced by far superior such examples as the technology is fine-tuned.

Tech-Savvy Employees Behind The Scenes

Slowly but surely we’re gonna be seeing robots filling a wide variety of travel-related roles. Understandably like with many industries automation and artificial intelligence within this domain has people feeling concerned about their employment prospects globally across all fields. The McKinsey Global Institute estimates that automation could claim up to 800 million jobs as soon as 2030 within the travel industry. Specifically, this will likely result in a substantial shift in what skills are required of people being employed by hotels, Cruise Lines, airports, travel agencies, and more.

A large segment of the human workforce will no longer be making customer service their top priority. But rather work behind the scenes knowledge of digital technologies will become essential for people currently employed in the industry. This is likely to be a difficult transition. Though a robot dominated feature may seem far-fetched many believe it to be as inevitable as when computers were placed typewriters.

A Balance Of High-Tech And Human Touch

While robots can do many things better than humans adding a personal touch to a hospitality experience isn’t among them right now. Robots that interact directly with customers are largely coasting on their novelty factor. Dash employed by InterContinental Hotels and loft hotels. Butler handled basic room service and deliver toiletries directly to your room. These little robots are adorable but problem solvers, they most certainly are not. Similar room service and luggage carrying robots have been employed at various hotels but again they have notable limitations.

Luxury, comfort, and attention to detail for many travelers can make or break the experience. These are the cornerstones of the hospitality industry as such we expect to see a specialized division of labor moving forward. Robots and AI will be charged with doing the heavy lifting grunt work and bringing high-tech touches like voice commands, smart recommendations. And more humans for their part will be freed up to be more focused on customer satisfaction than ever ensuring that travelers get an unprecedented level of individualized attention

A New Burden For Guests And Customers

There will always be an important role for human employees to play in the travel industry. But if we’ve learned anything from the widespread adoption of voice menus it’s that cost-cutting. Automation is often rolled out even when it inconveniences the customer. So while robots and automated systems will make our lives easier and more efficient in many ways. It does all place a burden on the customer or guest you need to adapt to the robot and communicate on its terms and using its language much like we’ve had to do with Siri, Alexa and Google home.

Related:  7 Unique Things to Do in Bergen, Norway

A human has the ability to interpret what you’re saying and appreciate the tone and body language with robots. At least for the next few decades, it will fall to the consumer to ensure that they’re communicating what they want clearly and unambiguously. Many interactions or offers like recommendations will need to be sought out rather than brought up because the concierge thinks to mention it.

We already have seen how technology can vastly improve the efficiency of the travel industry for companies. This has taken the form of everything from online bookings to inventory systems. For the consumers, advanced check-in and travel apps mean far less time spent waiting in lines or doing rigorous research. As robots are brought into the fold and artificial intelligence becomes increasingly common. We can expect the entire travel industry to become more efficient as far as robots are concerned.

They are streamlined and a single-minded approach to various tasks while not without its drawbacks will see many tasks. Take a fraction of the time they currently do with robots doing the more rudimentary tasks. Hotels are likely to be cleaner than ever but this is true of many subsets of the industry. Airports are beginning to employ self-driving buses and snowplows to clear runways. Robotic luggage is also poised to become the next big thing in consumer travel tech and be it at an airport, museum, hotel, or on a cruise ship. A robot that can communicate in dozens of languages is a major asset.

This is all arguably both a blessing and a curse. As previously mentioned dealing with a computerized menu no matter how they dress it up tends to be frustrating. But a robot or automated system able to pull from the entire internet of knowledge. Well, there’s no concierge, travel agent, or industry expert who can compete with that. Even more compelling is the ability of artificial intelligence to make personalized recommendations based on your own travel history and preferences. If you regularly fly with a certain company, stay with a particular hotel chain, or use travel apps. That personal data can be used to personalize not only your experience with said company but also help you to get the most out of your trip.

Related:  10 Interesting Things You Should Never Do In India

Robotic travel agent assistants like Amadeus can similarly get the ball rolling in terms of trip planning from restaurants and bars to sites attractions and live shows. Robots and programs armed with the right resources can make all the difference. While chatbots may be imperfect they keep getting better when given the choice between waiting on hold with an airline for an hour or speaking to a machine the latter doesn’t seem so bad.

Design Will Be Increasingly Robo-Friendly

Perhaps we will one day have robots that are more mobile than humans. But for the time being, they tend to be rather bulky and limited in their bill to navigate. The increased presence of robots within businesses and spaces associated with the travel industry. We will see those spaces undergo a fundamental shift in design, philosophy, hotels, airports, and even airplanes. Will need to be laid out in such a way that enables robots to get from point A to B. And complete their assigned tasks to run and maintain a robotic workforce.

The facilities need to take into account space for their storage, maintenance, and any auxiliary equipment or systems. It’s not just as simple as building a dedicated robot, elevator, hallways, dining rooms, and lobbies. For existing hotels, they’ll either need to renovate accordingly or bring in robots. Specifically designed to work within the limitations of the existing infrastructure. It’s gonna be a robot’s world.