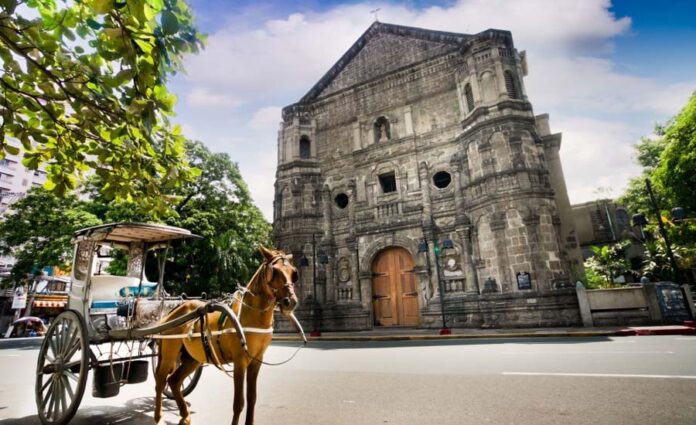 With so many islands, golden sands and gorgeous coasts are found in abundance in the Philippines. The country has something on offer for everyone the quiet isolation of Palawan island. Which boasts white beaches and vibrant coral. The popular ex-pat destination Bantayan island where with no luxury hotels you can get a real taste of island life. There’s Kadam Owen for the adventurer in you where the survivor was filmed. And finally, there’s Panglao where you can observe ocean wildlife like dolphins, whales, and even barracudas. Everyone who visits will leave with a different favorite Beach in mind.

Vehicles left behind by the United States at the end of World War two heralded the creation of this Filipino icon repurposed surplus. Jeeps became the number one method of public transportation and have remained wildly popular ever since. Colorful chrome-plated an incredibly Kitsch jeepneys are found throughout the Philippines streets and cities. They’re not so popular with environmental activists. However, who are looking to phase them out if you want to ride in one of these famous cars you’ll want to catch a plane ASAP to ensure you actually get the opportunity.

The Puerto Princesa subterranean River the longest underground river in the world running through an expensive cave system for just over five miles. You can find it in the St. Paul mountain range and it’s considered so beautiful. It was included in a 2012 list of the new seven wonders of the natural world. With this, in mind, you won’t want to skip out on it on your vacation. The only issue is it might prove tricky to get to hundreds of miles away from the country’s capital Manila. And you’ll also need to apply for a permit in advance.

Related:  Top 10 Most Surprising Underground Bunkers of All Time

If there’s one place everyone insists you have to spend time in to complete any Filipino getaway it’s El Nido. The area includes a group of beautiful limestone islands with unusual rock formations alongside endless stretches of white beaches and turquoise ocean. As a thriving tourist spot, el Nido has no shortage of hotels ranging from run-of-the-mill hostels to five-star luxury. You can even stay in bungalows built on the water outside of the popular beaches. However, there are also hidden secret beaches and lagoons you might be able to check out. And many of the island’s attractions focus on sustainability and environmental awareness.

The Philippines have plenty of exciting wildlife but one little guy stands out from the crowd the tarsier. These are the weirdest primates you’ll ever see and aren’t much bigger than a human hand. With gigantic eyes enabling them to see in the dark and freakishly long fingers. The eyes are actually the biggest eyes in proportion to body size of any animal. Unfortunately, deforestation in Southeast Asia has threatened many indigenous tarsier populations but in the Philippines, you won’t struggle to spot one in the wild.

Dubbed by some to be the eighth wonder of the world the Banaue rice terraces are vast terraces built on the slopes of the Ifugao mountains. By indigenous people carved by humans with no modern drilling equipment up to 2,000 years ago. These enormous fields are more than a little impressive. The irrigation system used to keep them green uses water from the rain forest below. Remarkably the terraces are still in full working order. Many local people still venture into the mountains to plant rice and other crops and the terraces are extremely culturally significant to an Ifugao culture.

Related:  10 Best Cities to Live in South and Central America 2020

El Nido alone has over 30 prime diving spots for you to choose from whether you’re a certified scuba diver or just treading water. There’s about as much to see and do underneath the water in the Philippines. As there is on land with diverse and beautiful underwater wildlife. If you head out to and allow or ah slob you can get up close and personal with whale sharks. There’s also the to Pattaya reefs National Park another major UNESCO site where you can see vibrant coral. However, if bright colors aren’t your speed there’s also the black forest a wreath boasting lots of black coral.

Balut is one of the weirdest foods in the entire world and definitely the thing any tourists wanting to test themselves. Should go for a partially developed duck embryo boiled and then eaten from the shell. It’s not for the faint of heart or vegetarians but if you are squeamish there are so many other amazing dishes to choose from. kadhi kadhi beef and peanuts tunes, the luscious roast pig called Lechon Adobo. It is considered the unofficial national dish which consists of chunks of pork or chicken cooked in soy sauce and vinegar with plenty of seasoning. For your sweet tooth is Halo-halo a dessert made of ice shavings with all sorts of fruits and vegetables thrown in

The Philippines is made up of over 7,000 separate islands and islets most perfectly explorable. If you find yourself there when it isn’t the monsoon season and you avoid those with political unrest. In addition to the previously noted El Nido, there are a plethora of other beautiful locations that don’t often get a mention for more great diving and picturesque waterfalls. You don’t want to miss Cebu but if you’re not so interested in the idyllic beach life there are the giant Island lives on Lisanne. It is not only the country’s largest island but also the location of Manila. The thriving urban capital which we won’t delve into too much here.

Related:  Top 10 Reasons Why Everyone Should Visit Malta

If flamboyant colorful festivals are your thing then look no further. Every city in the Philippines has its own festival. Davao City has the Kadayawan festival which celebrates a bountiful harvest in August every year. There are the fertility rites held in mid-May and Obon doe devoted to Saints who can provide a child two loving parents. There’s the vast sinew log first of all in Cebu which has partying, dancing and traditional costumes. Last but not least is Calibos Han Festival one of the most important and oldest festivals celebrating Filipino indigenous culture.